The Rainbow Orchid Volume 3 About To Bloom 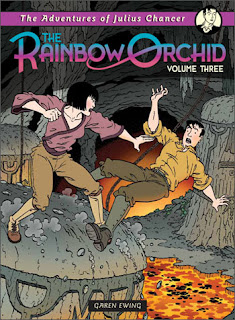 The third and concluding volume of Garen Ewing's The Rainbow Orchid will be published tomorrow, Monday 2 April 2012 by Egmont UK.

Marking ten years since the European ligne claire style mystery began in black and white in the small press BAM!, this third volume in The Adventures Of Julius Chancer has been long awaited and by Garen's own admission a little late due to "a bit of illness, the priority of paying work, and also the rather more pleasant interruption of the birth of my daughter in 2011." 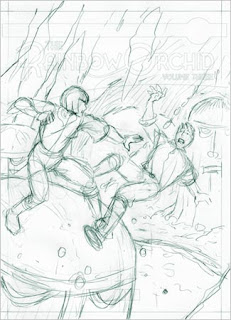 The original version of the story and its artwork has gone through various stages over those ten years since BAM! and Garen explains some of the differences and his reason behind the changes on The Rainbow Orchid blog. This also includes a few brief images from the new book and roughs of the cover and some other pages.

With the third volume available Garen will be promoting it at various UK comics conventions this year. He is current scheduled to be at DemonCon in Maidstone on 22 April, the Bristol Comic Expo on 12-13 May and Thoughtbubble in Leeds on 17-18 November 2012.

There are more details of all The Rainbow Orchid books on Garen's Rainbow Orchid website which includes a shop through which you can order signed and sketched copies of the books.

The downthetubes reviews of the previous volumes are below:
Volume 1
Volume 2
Posted by Jeremy Briggs at 7:00 am