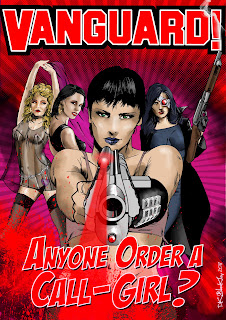 The second issue of the UK indie anthology comic Vanguard is on sale now, continuing the stories that began in issue 1.

As before, art duties on the International Woman of Mystery tale "Atomic Call" are by David Blankley, while Louis Carter continues to produce some brilliantly bizarre artwork on the sci-fi, fantasy epic Halo and the Gryphon. This issue's violent installment of 1800's When Good Donkey's Go Bad tale "Mammoth-Jack" features a change of artist however, as El Chivo takes over pencilling duties from Owen Watts. (However, Watts is still on board providing some fantastic lettering work for the six page tale...and that's not his only contribution to this issue).

Apart from this there is another Tucker story, featuring glorious, blood-soaked, full colour artwork by Bhuna.

"This tale features a change of direction for the psychopathic character originally created for Hallowscream," says editor Dirk van Dom, "bringing a fantasy-based twist to proceedings in order to 'lighten' the serial-slashing tone somewhat.

"I've also got another two wonderful pages of art featuring the comic's fictional editor 'Redbats' by David Withers, who also provides lettering for two of the strips herein. And, of course, it would be remiss of me not to mention that lettering master Jim Campbell has also deigned to grace us with his presence lettering David Blankley's noir-tastic Atomic Call pages.

Vanguard is 24 pages of cover to cover action, sci-fi, fantasy, horror, alien creatures, ass-kicking babes, angry donkeys, demons and deceased serial killers. You can read it for free online - just make your way here and enjoy the comic, but be sure to leave some comments in return.

If you enjoy Issue 2, then you might want to buy Issue 1. "Only issue 2 is available to view," says Dirk. "I didn't think it would be fair to those who purchased a copy of issue 1 to then make it available for free, so I haven't done so."

Of course, you might still want to buy a print copy of Issue 2 - and that's avialable too and comes with free gifts, including a copy of "Speed Date", a 16-page full-colour A5 comic that collects together both parts of slaser-serial killer story "Speed Date", which originally appeared in Hallowscream's 2010 and 2011 issues. Art on part 1 is by Ghostpockets and on part 2 by Bhuna.

If you would like to support us by purchasing a copy, you can order via paypal at the below rates:

Payments should be made to vanguardcomic@gmail.com.

• There are also copies of the comic on sale in Sub City, Exchequer Street, if anybody Dublin-based wants to check that out.
Posted by John Freeman at 8:00 pm