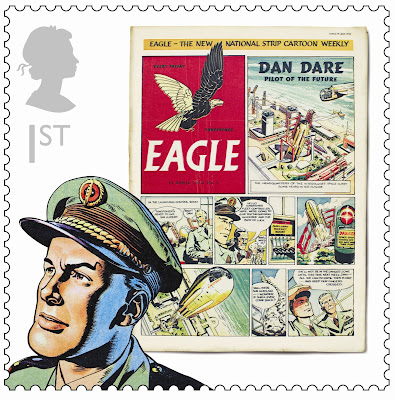 Here's the third of our ten posts to mark the release of the Royal Mail's Comic Collection, celebrating 75 years of British comics. The Royal Mail have kindly sent us large versions of each stamp, so we thought we'd show them off in all their glory, in the order of first comic publication.

The first issue of Eagle was released in April 1950. Revolutionary in its presentation and content, it was enormously successful; the first issue sold about 900,000 copies. Featured in colour on the front cover was Dan Dare, Pilot of the Future, created by Frank Hampson. Other popular stories included Riders of the Range and P.C. 49. Eagle also contained news and sport sections, and educational cutaway diagrams of sophisticated machinery.

Despite its decline in the late 1960s, victim to intense competition and bad management, The Eagle was revived in the 1980s - and indeed, 30 years ago this week, as Lew Stringer notes on his Blimey! It's Another Blog about Comics blog.

Dan Dare and elements of both new and old Eagle are today owned by the Dan Dare Corporation, who continue to try to get a feature film and tv series based on Dan Dare off the ground.