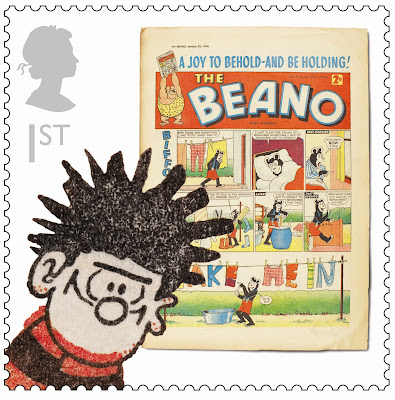 Here's the second of our ten posts to mark the release of the Royal Mail's Comic Collection, celebrating 75 years of British comics. The Royal Mail have kindly sent us large versions of each stamp, so we thought we'd show them off in all their glory, in the order of first comic publication.

The Beano first appeared on 30th July 1938. The Dennis the Menace strip (now known as Dennis and Gnasher) first appeared in 1951 and is the longest running strip in the comic. Other iconic strips include the Bash Street Kids, Roger the Dodger and Minnie the Minx.

Still Britain's best-selling weekly comic, the title is also available for iPad and the app had over 72,000 downloads within days of launch earlier this year. There's more about The Beano online at www.beano.com