Panel Borders: Alan Moore and the Horrors at Red Hook 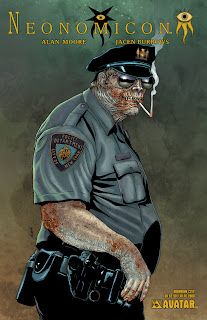 Continuing the Panel Borders radio show's month of shows about H.P. Lovecraft, Alex Fitch talks to Alan Moore about his final graphic novel that isn't part of the continuing League of Extraordinary Gentlemen narrative - Neonomicon - which has been published, along with its prequel The Courtyard, as a graphic novel by Avatar Press.

Both comics follow on from Lovecraft's tale 'The Horror at Red Hook' and Alan discusses why he chose that story in particular to explore further, plus the origins of The Courtyard in an abandoned short story collection called 'Yuggoth Cultures', and examples of Lovecraftian imagery in his League of Extraordinary Gentlemen saga.


Neonomicon is the full-colour sequel to The Courtyard, with original series artist Jacen Burrows providing art, in which Alan Moore takes his re-invention of HP Lovecraft mythos to new levels of madness as investigators look into what happened to legendary FBI man Aldo Sax.  The path it leads them down is one of the most intense and disturbing works Moore has ever written.