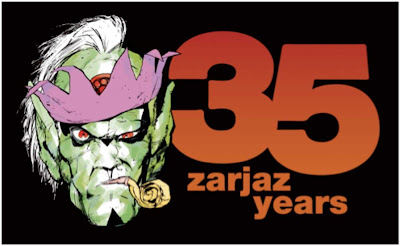 Break out the balloons, paper plates and the party poppers – it’s 2000AD’s birthday!

The Galaxy’s Greatest Comic is celebrating three and a half decades of Thrill-power at the SFX Weekender event in February 2012, with its one and only official 35th birthday party!

And what better way to mark this incredible moment in comics history than the legendary co-creators of classic characters Judge Dredd and Strontium Dog, John Wagner and Carlos Ezquerra, appearing together for the first time in years!

Along with a glittering array of galactic talent, there’ll also be a special Friday night bash, and the 2000AD team will be ensuring that the next 35 years gets off to a flying start with all the latest graphic novels plus giveaways and freebies!

Back for a third year in 2012, the SFX Weekender, taking place at Prestatyn Sands holiday camp in Wales from 3-4 February 2012, will be packed with activities for fans: big-name guests, interviews, Q&A sessions, comic workshops, videogaming, music, book readings and plenty more.

“It's an incredible achievement for any British comic to reach 35 years of continuous publication,” said 2000AD editor Matt Smith, “and the fact that 2000AD is still here is testament to the remarkable talents of the writers, artists, colourists, letterers, designers and editorial staff that have worked on it over the past three and a half decades – and, of course, to the loyal readership that continue to pick up the Galaxy's Greatest every week.

"We hope that the 35th birthday party at SFX Weekender will be a fitting celebration for everyone to raise a polystyrene cup in salute to Tharg's Mighty Organ!”

"We're thrilled to be celebrating 2000AD's 35th anniversary at the SFX Weekender!” said Dave Bradley, editor of SFX. “The Galaxy's Greatest Comic has been incredibly influential through its history and remains a must-read – it makes sense to join up with the world's leading sci-fi mag for a fan-filled party. And meeting Judge Dredd legends Carlos Ezquerra and John Wagner will be a geek-tastic treat. Roll on February!"

• Tickets can be purchased by going to www.sfxweekender.com