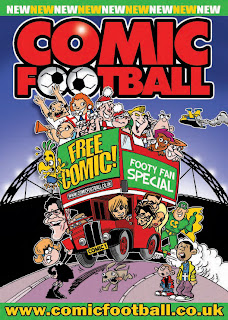 Subscribers have just received a letter advising of the title's "temporary suspension" and the return of any subscription money owed - but the letter holds out the promise that the comic may return in future.

The 32-page title was the latest spin on a number of football comics such as Rammie created by the company, which is sold at the Derby County matches (
Posted by John Freeman at 12:22 pm