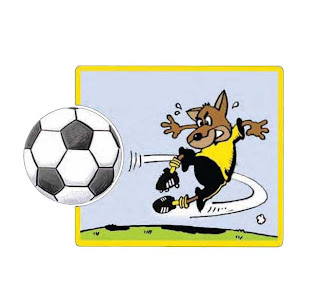 We've got some good news about Comic Football, the national subscription-only comic that recently informed subscribers it had been cancelled.

It seems that this is only part of the story - the comic will return later this year, but in a new, free online format.

Because of this change of direction, Hinckley-based publishers Comic Football Ltd. stopped taking and have refunded subscriptions for the national version of the comic. It's hoped the digital re-launch as a web comic with a brand new site will happen before Christmas.

The new web comic will be constantly updated and free, hence no subscriptions. There's also iPad, Android and Kindle apps in the pipeline, but more about that when it happens.

The bottom line for the company is that it's responding to the fast-changing world of publishing, particularly as the move to digital platforms gathers pace. New technologies means the market is changing and nobody is quite sure how to launch a comic these days - or even re-launch one, it seems, in some cases.

"They've tried it one way, now they're going to try it another way, and they'll keep on trying until they hit on a sustainable market model," an insider told us.

In the meantime, the company's activities producing comics for individual football clubs - their core business - is going very well. They just signed up with Celtic and Doncaster Rovers, and already deliver publications for Manchester City, Newcastle, Stoke City, Wolves, Wigan, Derby County and Aston Villa, with more in the pipeline.

The company's main activities are bespoke comics for junior fans, featuring the club's mascot, club-based comic strips, player or match strips and packed full of features, aiming to be a comic tailored uniquely for a team's junior membership, acting as a marketing and promotional product, or as a retail product for club shops ... or even made available through the local news trade.

Alongside dedicated club features, Club Football also offers a catalogue of great characters that can be featured in the comics, aiming to help clubs capture the next generation of fans and give them something exciting in return. 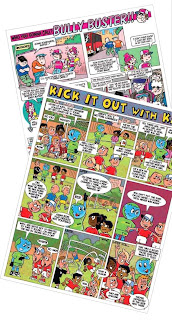 Their work is being well received, too. "Comic Football has offered us innovative and well-crafted content that has lit up the junior section of our award-winning Manchester City programme," says Ian Guildford from Ignition Publications.

We're also told they're still on the lookout for artists, so submissions are welcome.

• Official web site: www.comicfootball.co.uk
Posted by John Freeman at 11:45 am