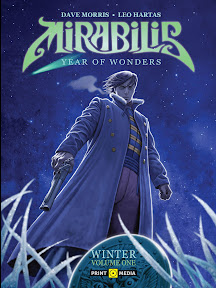 A huge graphic novel project by Dave Morris and Leo Hartas, Mirabilis is a fantasy adventure story for young adults which opens New Year’s Day 1901, when a green comet appears in the sky. As it gets bigger, the line between reality and fantasy blurs. Soon there are mermaids in the Thames, elves in Parliament and a dragon roosting on Big Ben. But then the comet rounds the sun and starts to fade. Will the world be able to go back to a life without magic?

The full-colour graphic novel was originally serialized in The DFC, the weekly print comic published by Random House UK, who financed the production and has been released as a digital edition for iPad.

"We couldn't be more pleased with the production design on these books," says Dave Morris. "Typography, colours and layouts all add to the reading experience, and Print Media have carried all that through with professionalism and a real eye for detail.

"The end result is not simply our comic between hard covers, but a beautiful work that we think readers will treasure."

Mirabilis: Year of Wonders Volume 1 was solicited by Diamond (Order Code FEB111949), joining Keith Page and Stephen Walsh's Iron Moon title as the first graphic album projects from the new British company. Both albums will be re-solicited in July Previews.

• Advance copies are available now only from First Age Comics, The Assembly Rooms, Lancaster; order it online from the First Age eBay Store


• More about Mirabilis: Year of Wonders on the STRIP Magazine blog

• Learn more at www.mirabilis-yearofwonders.com
Posted by John Freeman at 10:00 am