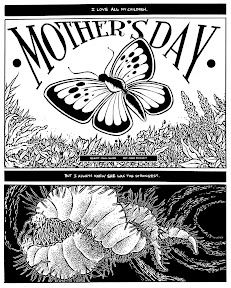 Paul, whose credits include The Daily Telegraph, Mojo, Fortean Times, Time Out and a host of other publications and who makes occasional documentaries for BBC Radio 4, commissioned Hans Rickheit to draw the story for him earlier this year.

After listening to Attenborough talk about the strange breeding strategy of Britain's Large Blue butterfly and its dependence on ants to complete it - a tale that "utterly captivated" the journalist - Paul came up with an idea for a script.

"This particular project began in June 2010, when I heard Attenborough describe how the UK’s Large Blue butterfly, the Sabuleti ant and the Ichneumon wasp engage in a constant dance of violence and deception to ensure their respective children survive.

"The story began with fratricide, cannibalism and addiction, then moved on to include a spot of mind-control, forced pregnancy and hundreds of dead babies. Naturally, I was hooked.

"... I could see every stage of it playing out as a series of comics panels in my head," he continues. "...Comics, I thought again, would be perfect. I knew I couldn't hope to draw the strip I envisaged myself, so that meant I'd have to find a more accomplished artist to draw it for me."

Coming across Hans Rickheit's "magnificently creepy" webcomic Ectopiary on the Fantagraphics website by chance, Paul then commissioned him to draw the creepy tale, turning the butterfly's bizarre life story to the comics page.

"When I discovered Hans’ magnificently creepy art, I managed to persuade him to take the strip on, and he did a great job," says Paul.

We agree - and you can check the complete story via the links below.

• To read Hans Rickheit's on-going webcomic Ectopiary, or to buy his books and original art, visit www.ectopiary.com
Posted by John Freeman at 11:06 am