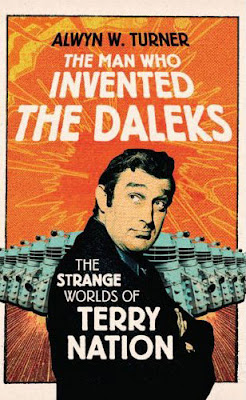 Aurum Press release The Man Who Invented Daleks later this month (25th May), focusing on the life of script writer and author Terry Nation, and includes background on the creation of the Dalek comic strips for TV Century 21 and other titles.

The book is written by Alwyn W. Turner, author of a number of acclaimed books on modern British culture, including Crisis? What Crisis?: Britain in the 1970s, Rejoice! Rejoice!: Britain in the 1980s, Halfway to Paradise and The Biba Experience.

The Man Who Invented Daleks includes background on how the Daleks were brought to comic strip, revealing that the first Dalek merchandising - capitalising on the huge popularity of the genocidal pepper pots - was The Dalek Book, with Nation even then attempting to create an entire mythology for the creatures beyond the Doctor Who series. Published in 1964, it became one of the fastest-selling children's books of the year.

After the broadcast of the original Dalek story Britain as a nation went "Dalek mad" with one range of 'mini-Daleks' quickly selling 100,000 units.

The Daleks also became featured characters in cartoons by artists such as Giles for the Daily Express and had their own weekly strip in TV Century 21. "I suppose the thing that attracted me to the Daleks was jealousy," the book reports Thunderbirds creator Gerry Anderson as saying, explaining why these rivals to his own characters were included in the title's mix.

Turner notes that the strip provided ideas and storylines beyond Doctor Who that he hoped to be able to exploit in a standalone Dalek TV show which, despite the popularity of the monsters, never quite managed to materialize.

Despite this, almost half a century after their first appearance, new additions to Dalek mythology continue to top the Saturday-night ratings, while the word itself has entered the Oxford English Dictionary, passing into the language as the name of the most famous race of aliens in fiction.

Terry Nation was one of the most successful and prolific writers for television that Britain ever produced. Survivors, his vision of a post-apocalyptic England, so haunted audiences in the 1970s that the BBC revived it over 30 years on. Blake's 7, now revived as audio dramas and novels, endures as a cult science fiction classic.

But while the Daleks brought him notoriety and riches, Nation played a much wider role in British broadcasting's golden age. As part of the legendary Associated London Scripts, he wrote for Spike Milligan, Frankie Howerd and an increasingly troubled Tony Hancock. And as one of the key figures behind the adventure series of the 1960s - including The Avengers, The Saint and The Persuaders! - he turned the pulp classics of his boyhood into a major British export.

Like Arthur Conan Doyle before him, Nation was frequently bemused by the appeal of his most famous creations, and similarly cavalier toward them. Now, The Man Who Invented the Daleks explores their curious and contested origins, and sheds light on a strange world of ambitious young writers, producers and performers without whom British culture today would look very different.


In addition to charting the history of the Daleks, the book also charts their return in the 1970s - with Nation paid the princely sum £25 per episode for their appearance (low usage fees quickly came to an end once Roger Hancock established himself as Terry's agent - in the 1980s, he was paid £25 a page for any Dalek appearance in Doctor Who Magazine strip); the development of Survivors and Blake's 7; and the Daleks return to the modern Doctor Who, the creatures Nation's enduring legacy long after his passing.

• Buy The Man Who Invented Daleks from amazon.co.uk

• Buy The Man Who Invented Daleks from amazon.com