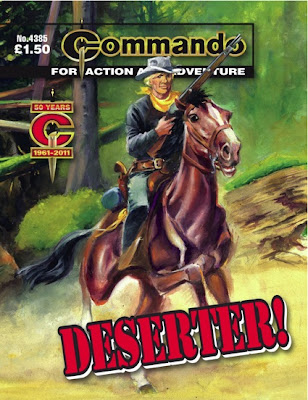 Matt Badham wrote "Deserter!", a story for DC Thomson's Commando title back in 2008, which has just been published in Issue 4385 - giving you some idea how long some scripts can take to get into print.

Here, Matt outlines how he created the story and offers some tips to new and would be writers along the way - be it comics or features...

I don't feel very comfortable referring to myself as a writer, even though I've been professionally published since 2006. During that time, I've written articles for publications such as the Judge Dredd Megazine, Tripwire, Comics International and the Big Issue in the North, and scripted for 2000AD and Commando Picture Library. (NB: That last statement is slightly hyperbolic. I've written one five-page strip for the former and one issue of the latter.) If you asked me to name some writers, I'd probably mention the likes of Arthur Conan Doyle, Alan Moore, William Goldman, Warren Ellis, Connie Willis (my absolute fave) and Paul Cornell, and it seems wrong to place myself in such esteemed company.

But I do write and I'm paid to do so. I suppose, therefore, I am a writer, whether I like it or not. And I do, mostly… like it, I mean.

That doesn't mean that I don't find writing difficult. On the contrary, my average work-day is like one of those scenes in an action movie where the hero, facing insurmountable odds, has his ass handed to him on a plate. Then, suddenly, and against those afore-mentioned odds, he triumphs. Every day I get up and the blank page kicks my ass and then, eventually, I start writing and everything is fine. (It doesn't actually matter what I write, just that I start. I very much adhere to the old adage that 'writing is re-writing'.)

On the day I commenced my Commando script, I suffered a particularly bad ass-kicking. You see, I don't write comic scripts often (I don't write much fiction). Most of my attempts to do so are sitting, abandoned, on my hard drive. This is because I've got interviews and features -- which pay the bills and buy food for my kids -- to get on with (and the kids refuse to starve for my 'art'. Go figure. They're selfish.)

So, writing my Commando was largely uncharted territory and particularly hard work. But it was enjoyable and I think I learnt a few new lessons about writing. What follows is the process as I remember it.

(Actually, before we get to that, here are the four things I think I know about how to get ahead in writing. If you want to make it (whatever that means), you should, in my experience, 1) work hard 2) treat yourself and others with respect 3) be your own harshest critic and 4) give yourself a pat on the back -- but only one! -- if you achieve a significant milestone (such as getting published for the first time or finding work with a new market.))

Here's the blurb from the back of Deserter! to set the scene:

'Abraham Brown's older brother Robert went off to serve in the Army of the North in the American Civil War… and he didn't come back. Abraham followed in his footsteps grimly determined to avenge his brother's death.

But when he discovered that it hadn't been enemy action that ended Robert's life but a pack of outlaws he saw only one way to settle the score -- and that meant deserting the flag he had signed up to serve.'

Deserter! is one of the few ideas I've had that popped into my head fully formed. I knew who the main protagonist was, had an idea who would make up the supporting cast, and had a firm beginning, middle and end. And I had what I still hope is a cracking twist that sends the whole story off in a new direction, just as the action seems to be winding down.

So, I wrote up my idea according to publisher DC Thomson's specifications…

And let's stop there for a moment, because there's a valuable lesson here for any aspirant writers out there.

Tip One: if you want to be taken seriously as a professional writer, obtain and read the submission guidelines for the publication you're pitching to and follow them. Editors are busy people and your job as a freelancer -- and I think it was Rob Williams (2000 AD, Cla$$war, Wolverine) who said this -- is to make their lives as easy as possible. If there are no guidelines, then study several issues of the publication rigorously before submitting your work to them (actually, you should also do this even if there are guidelines).

The first draft of my Deserter! synopsis was written up as a 1000-word document and submitted to editor Calum Laird by email, as per the Commando guidelines. And it was rejected. But Calum made some positive noises and suggested I re-write it. You see, I'd committed what I believe is a common mistake amongst novice Commando writers. The story was fine, as were my characters, but there just wasn't enough plot.

Tip Two: if you're pitching to Commando, you need to remember that this war comic eats plot and incident. I mean… devours it. And then, with its belly bulging and its belt buckle loosened, has the temerity to ask for second helpings. This is because, as noted by others elsewhere, the title is more novelistic than most comics, with a compressed storytelling style that relies a lot on captions to convey action. In fact, Commando, in my opinion, has almost as much in common with an illustrated book as it does with other comics.

And so I set about re-writing my synopsis, incorporating Calum's suggestions along the way (he'd given me some ideas as to how to 'fill' my plot out a bit).

Tip three: the editor is King (or Queen). As I've already noted, I write articles for the Judge Dredd Megazine. I used to fret a lot about what was being written about my articles online, in terms of feedback from the readership. Then, one day, I had a sudden realisation. It's not my job to worry about what the readers want. That's the role of my editor, Matt Smith. And he's the guy that I, ultimately, should see as my 'audience'. He's the one I should worry about pleasing. And writing for the Megazine has been a much less stressful experience since I had that realisation.

The second synopsis was accepted and I went ahead and wrote the script. That was in 2008 and it's only now that Deserter! is on the news-stands.

(I had become convinced it would never be published, as is sometimes the case even with paid work.)

It's been quite refreshing reading Deserter!, as, although I remembered the bare bones of the story, I'd forgotten the specifics. The comic is definitely a 'ripping yarn' peppered with if not 'anti-war' statements, then a few 'severely-ambivalent-about-war' moments. The thing is, though, most of the (good) stories told in Commando aren't, to me, about war, even though if you removed that element they would probably need severe re-jigging to work.

Let me try and explain that a little bit better.

Although Deserter! is set against the back-drop of the American Civil War, it's actually about the desire for revenge and how it can affect a person's judgement, and potentially lead them to a ruinous end. Abraham Brown goes to war to avenge his brother's death. As time goes on, he becomes reckless, takes more and more risks, and endangers his life and the lives of his comrades…

Tip four: ultimately, the best Commando stories are, in my opinion, about people and how the extreme situations found in times of war can affect their lives. A Commando may be full of conflict -- in terms of battlefield action -- but its core should actually be the internal conflicts of its characters. And I'm not the only one who thinks so:

Here's editor Calum Laird, on the subject of what makes a good Commando, in an interview with this very site that I conducted. He's talking about the story submissions of a writer called Cyril Walker, who was seen by the editorial team as being one of the comic's top writers (Cyril is, unfortunately, deceased):

"[They'd be] awfully badly typed and there’d be misspellings with little handwritten corrections. It was messy. He made mistakes. He had all sorts of silly phrases he used. But the core of his story, every story, came down to people.

"He had observed people his entire life and because his stories were so good from that point of view, you could ignore the bad spelling and the various other bits and pieces, because that’s what a sub-editor’s job is there to do, to make sure everything is all right. Obviously, it’s much better if it comes in properly written but if you’ve got a writer whose stories are good enough, then you’re prepared to make an allowance for that.

"Whereas you get other people, their stories come in and are beautifully set out, spelt, punctuated, adequate stories, the whole thing and somehow it’s soulless. So, it’s up to writers to push the envelope a bit here and there to make their stuff different from everyone else’s."

Deserter! is on sale now. Should you happen upon a copy and read it, then I'd love to have your feedback.

Addendum: I've since had four story ideas for Commando go belly-up on me at different stages of the submission process. It remains to be seen whether Deserter! was a fluke.

• Official Commando web site: http://www.commandocomics.com/
• Click here for subscription information or write to: D.C. Thomson & Co Ltd, The Subscribers Department, Commando Library, 80 Kingsway East, Dundee DD4 8SL or Freephone (UK only) 0800 318846
• Commando is also available for iPad and iPhone. The apps are free to download through the Apple iTunes App Store and a digital subscription is priced at £4.99 per month, compared to a £99 annual print subscription. For those not sure there are four free issues to download prior to making a purchase.
• Commando Comics iPhone App on iTunes
• Commando Comics iPad App on iTunes
Posted by John Freeman at 4:05 pm

Commando Calum Laird has writte to us about this post from Matt to say "this short piece encapsulates the core of successful Commando plotting/writing very well. Very well indeed.

"I shall be pointing other people towards this in future."