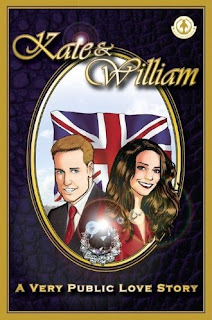 At the time of writing the royal wedding is less than two weeks away and Markosia's Kate and William: A Very Public Love Story written by Bleeding Cool's Rich Johnston and illustrated by Mike Collins (on the bride's side) and Gary Erskine (on the groom's side) has hit the shops. It also looks like finishing the book was not the end of wedding bells for Gary as he is now on extended leave from the Scotch Corner art blog to attend the wedding - not the one in London however but his own which is rather further away. We wish Gary and Mhairi all the best (and William and Kate as well, of course).

Staying with Scotch Corner, blog founder and artdroid Graeme Neil Reid has opened an online shop for his work. Named Original Scribbles, the shop features both artwork and and the type of sketches that Graeme features on his blog I Got No Work Done Today Because... and also sells at conventions. Artwork currently available ranges from Doctor Who to Ghostbusters and Battle Picture Weekly to Marvel superheroes. Graeme will be at the Macintosh Church on 18 June as one of very few non-Glaswegians to have a sales table at the Glasgow Comic Con, along with Gary Erskine and quite possibly the majority of the rest of the Scotch Corner artists.

Staying north of the border and with an election due just after the royal wedding writer Mark Millar has nailed his colours to the mast and unsurprisingly they are tartan. Millar is backing the Scottish National Party and endorses its leader Alex Salmond who's claim to fame (from a comics point of view) is that he has appeared in The Broons. We can only assume that Mr Salmond does not endorse 10 year old female vigilantes roaming Scottish cities.

And finally our best wishes for a speedy recovery go to Lew Stringer over at Blimey! With his work appearing in the current issues of Dandy, Toxic, BeanoMAX and Viz Lew should be recovering from a celebration rather than an illness. Thanks for the kind words mate - now hurry up and get better otherwise where are we going to read all the latest behind the scenes happenings on British humour comics?

Posted by Jeremy Briggs at 3:28 pm