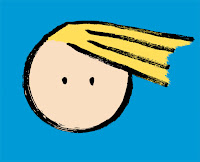 (via Nick Abadzis and Forbidden Planet International): I missed this great news last week but make no apologies for plugging now. Comic creator Nick Abadzis has announced Blank Slate Books will be publishing a collection of his hugely popular strip Hugo Tate, which first appeared in Deadline magazine alongside Tank Girl and other well known indie strips.

Hugo Tate ran in Deadline magazine from 1988 to 1994. Part of it was collected as Hugo Tate: O, America in 1993 and in 1994 this collection won a UK Comic Art Award for best graphic novel.

"Over the years, I have been asked for this collection, many, many times," says Nick. "It’s taken a long time to get together, for which I apologise to all those patient readers and fans of Deadline out there. I’ve been working on it, on and off, for years, digitizing and restoring the artwork. (Note to self: never use zip-a-tone again. It shrinks with age.)

"But this is to let the faithful out there know that the Hugo Tate book really is on its way. It’s going to be published by Blank Slate, an imprint whose output I’ve been really enjoying in the past couple of years."

It's hard to explain in a couple of sentences what Hugo Tate is about exactly, but he was a stick-man who, as he acquired experiences during the run of the strip, slowly evolved into a more figurative character. It's the sort of visual metaphor that could only work in comics.

Blank Slate has been putting out some great indie titles: most recently, Luchadoras by Peggy Adam, chosen as part of the 2007 Sélection Officielle at the Angouléme International Comics Festival; and Sleepyheads by Randall C. It's easy to see Hugo Tate alongside these and other company's many other titles - it's a perfect fit.

• Click the strip images in this story to view some of Nick's favourite pages from Hugo Tate - or just click here to browse them all.

• Blank Slate Books is at www.blankslatebooks.co.uk
Posted by John Freeman at 10:07 am