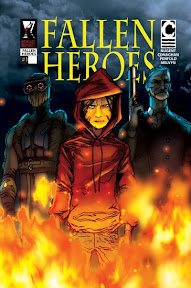 The Comic: A stalker of demons and legends, a pair of master criminals, a teenager on the brink of madness and a man forever cursed with the desire for vengeance. They are all pawns in a plan set in motion over nine centuries before their birth. Pursued across the globe by enemies both human and supernatural, they must overcome their mistrust of each other and uncover the truth before it destroys them all.

Fallen Heroes is a supernatural adventure that pits an unlikely group of heroes and anti heroes against an evil which has existed since the first crusade. If they can keep from killing each other long enough they might just be able to stop the world from plunging into a new dark age.

The Review: Adapted from the contemporary fantasy novel by Barry Nugent, there's no doubting that the Fallen Heroes team have marketed the launch of this new comic very effectively - but is it actually any good?

Well, there's no doubting the quality of much of the art and the sheer impact of the visuals in this first issue, as we see a young student haunted by nightmares, a high-tech piece of burglary go badly wrong and are introduced, obliquely, to some of the main players in this story. Steve Penfold's art is terrific - vibrant, energetic, and for the most part, there's some great storytelling.

But - and for me, there is a huge but - while it's great to have a story that leaves you wanting more, tantalizing readers with tidbits of story and information, hooks to pull you along and, hopefully, into buying Issue 2, there's a fine line between doing that and the story becoming perhaps a shade incomprehensible.

Judging by other reviews, I'm conscious I'm perhaps in a minority here, but for me Fallen Heroes tends to fall into the latter category. Yes, there's a handy overview of the back story on the inside cover, but sadly, from bitter experience when editing Overkill and other Marvel UK titles back in the 1980s, we soon discovered many readers jumped straight to the comic and never read these handy guides.

There's some fun back matter, post story, too - but again, the comic's the thing, and if it's hard to work out what's going on, especially in a comic aimed firmly at the same market buying superhero titles, you're making things difficult for yourself when it comes to gaining readers.

Take, for example, a scene post a nightmare sequence, as a young student is haunted by a really bad dream. On waking, he disturbs a lecture - but which student is it in this panel?

You'd think it was the one with the light from a projector shining on him, perhaps? No. It's the guy in the hoodie at the back of the room.

Now, you're probably going to say this is the worst kind of nitpicking - after all, in the next panel we know exactly who's in the firing line - but its storytelling like this, however incidental, that might seem like a good idea at the time, to jar readers perceptions, perhaps, that actually, again in my experience, that puts them off.

Again, as our high-tech burglar enters a building, he seems to be heading for some kind of sensor net. Does he get through it somehow without setting it off? Does the power go off, shutting it down? Does he actually set it off and alert security? Again, the visuals are superb art wise, but as a reader, you're left unsure.

Yes, I am probably being hyper critical - but when you have such a good looking book as this, these things actually stand out all the more.

Don't get me wrong. Fallen Heroes shows immense promise and, given that the first printing has already sold out, it's clearly found a market. There have been many positive reviews. There's an intriguing back story, excellent art, and, all round, the team know what they're doing. But for me, I'm demanding more of them for Issue 2.

• The first printing of Fallen Heroes #1 has sold out: Beyond the Bunker are currently in the process of arranging a second print run with ukomics. This will again be a limited printing, so if you’re interested in picking up a copy when they become available then send us an email at fhcomicsAThotmail.co.uk with your name and address and they’ll add you to the list.

• Hi-Ex! Blog
"The strip itself starts with a bang- dropping the reader into the middle of an incredibly strange situation with no explanation at all of what’s happening to this characters. If you’re wondering- this is a Good Thing. Both the character and the book itself are instantly interesting as the reader asks the obvious question: what the hell is going on?... I cannot imagine anyone reading this and not wanting to pick up the next one.”

• SciFi Pulse
“The teen in the red hoodie is not Clark Kent. But I will say that there’s more action and interesting storytelling in these 22 pages than in all of Superman: Earth One... It’s a roller coaster ride that includes skeletons, Mission: Impossible-like stunts, a mysterious data disc and teeth-rattling explosions.”

•  Geeky Girls Love Sci Fi
"Because the artwork is so heavily relied upon to tell this story, the story itself occasionally becomes lost and doesn't flow as well as it could. Like many greats before it, Fallen Heroes takes no prisoners in refusing to hold the reader's hand through its narrative, and neither should it, but while #1 has certainly piqued our interest, we're trusting that issue #2 will give us just a bit more to hold on to. And make no mistake; we'll be buying issue #2."

• GeekPlanetOnline
"Solid début issue that should leave you wanting more... Fallen Heroes is well worth a read and as an independent comics release that's a little bit different it is worth your support."
Posted by John Freeman at 10:05 am