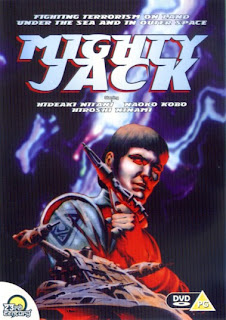 It isn’t often that we go eastern here on downthetubes and when we do it is normally manga or anime, so this is a little different.

Maiti Jakku was a 13 episode live action TV series broadcast in Japan in 1968, telling the story of a secret international policing organisation which uses a flying submarine against a terrorist organisation known as Q. Wikipedia tells us that in 1986 American producer Sandy Frank combined several of the Maiti Jakku episodes into a dubbed feature length film entitled Mighty Jack.

Fast forward two decades and Mighty Jack was released on DVD by a UK company called 23rd Century who produce very cheap DVDs and, suffice to say, have something of a reputation on many DVD forums. While their lack of grammar and spellchecking on the back cover may be amusing, it was the front cover that attracted the attention of Technodelic’s Shaqui LeVesconte. The DVD cover and menu screen both use the same illustration of a man and a spaceship which has absolutely nothing to do with the film.

How do we know that? Firstly because there is a disclaimer on the back cover of the DVD which states “The image on the sleeve may not necessarily correspond with the film.”

However secondly, and rather more importantly from a UK comics perspective, because the illustration is taken from the front cover of DC Thomson’s science fiction digest Starblazer. While some of the early Starblazers used generic agency art, the cover of issue 64 The Exterminator was painted by Ian Kennedy specifically for the story’s publication in November 1981.

Nice to think that someone at 23rd Century liked the image enough to use it but, since there is no reference to a DC Thomson copyright on the sleeve, we wonder if they paid a licensing fee for it?

We are more than happy to say "Starblazer © DC Thomson and Co Ltd" even if they aren't.

• There is much more about Starblazer on the downthetubes main site

• With thanks to Shaqui LeVesconte
Posted by Jeremy Briggs at 9:00 am