A Comic Convention Returns to Glasgow 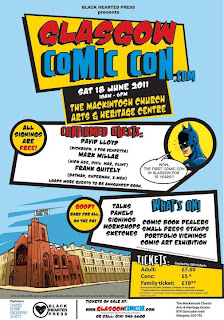 It has been some 15 years since Glasgow hosted a comics convention with the last of the GlasCACs, the Glasgow Comic Art Conventions. Since then Scotland has had 2 Oxfam Comics Days in Edinburgh, 3 Hi-Exs in Inverness, 4 Dundee Comics Days as part of that city's Literature Festival and 5 Moniaive Comics Festivals near Dumfries.

While Moniaive has faded into history and Hi-Ex is taking a well deserved break, Oxfam and Dundee are both due back in 2011 in the summer and autumn respectively. However to tide Scottish comics fans over until then the organisers of the twice yearly Glasgow Comic and Toy Fair, Sha Nazir and John Farman, have taken the plunge and announced the new Glasgow Comic Con.

The convention will take place on Saturday 18 June 2011 in Glasgow's Mackintosh Church Arts and Heritage Centre at Queen's Cross with the doors open from 10am to 6pm. The first guests to be announced are V For Vendetta artist David Lloyd and local lads, artist Frank Quitely and writer Mark Millar (at his fourth comics event in Glasgow in five months). Tickets are priced at £7.50 and went on sale at the Glasgow comic and toy fair held last Saturday. They will be available to the rest of the country when the event's website goes live soon.

The convention will be run in partnership with the Charles Rennie Mackintosh Society with half of all profits going to the arts education and outreach work undertaken by the charity.

There are more details about the convention on its Facebook page.

There will be more details about the convention on its website when it goes live.
Posted by Jeremy Briggs at 7:00 am