Thoughts On The 2010 Edinburgh BookFest Programme 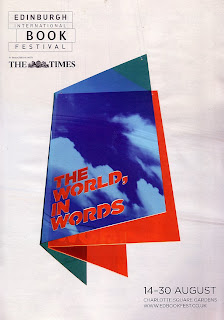 "Widely recognised as being a valuable means of encouraging people to read more extensively, graphic novels have become a sought-after feature of our programme."

Reading such a statement on page 8 of the 2009 Annual Report of the Edinburgh International Book Festival seemed to bode well for the 2010 Festival maintaining the comics content of their programming at the same high levels we have become familiar with in the last couple of years. So the disappointingly small selection and type of comics related events in this year’s programme came as something of a surprise.

It would seem that the decision makers at the Festival have backtracked on the progress made on the subject of comics over the last couple of years with this year’s events falling into two distinct categories - the political cartoonists and their newspaper work for the adults and workshops by the comics people for the children, each workshop with specific age ranges to keep any adults away. This year there are no talks by comics creators aimed at the family audience, none by big name graphic novelists aimed at the teen and adult audience, and no discussions with creators or presentations by academics on the merits of the medium.

That said, what little is in the programme is of a high standard. The If... and Doonesbury combination of newspaper cartoonists Steve Bell and Gary Trudeau is a major coup for the BookFest. It is also good to see that comics creators Glen Dakin, Garen Ewing and Sarah McIntrye can show off their undoubted talents and pass on their enthusiasm to the primary and early secondary school children that their various workshops have been advertised for.

However, where are the evening talks by comics and graphic novel creators that have graced the Festival for the last couple of years? Creators of the calibre of Bryan Talbot and Posy Simmonds appeared in 2008 while Neil Gaiman and Mark Millar were there in 2009. Indeed, the same page of the 2009 Annual Report recognises the quality of last year's comics creators by stating, "Designed to appeal to teens and adults, our graphic novel events featured huge talents including Neil Gaiman, Mark Millar and Ian Rankin (making his debut into the medium)."

It wasn’t as if the comics events in previous years weren’t financially successful for the Festival. In 2009, as we reported here, of the 12 events in the programme that could be considered comics related, nine sold out before the Festival even opened. That sell-out rate of 75% put them well above the overall 2009 Festival average of 45%. As for comics related sales in the Festival bookshops, the 2009 report states, "Neil Gaiman and Ian Rankin's joint event on graphic novels produced a long and enthusiastic queue of fans, resulting in excellent sales."

After the visibility and prestige that comics and their creators have received in recent years at the Edinburgh International Book Festival, it appears that having a new team in charge has set the cause of comics and graphic novels at the festival back by years. Let us hope that things will improve in 2011.