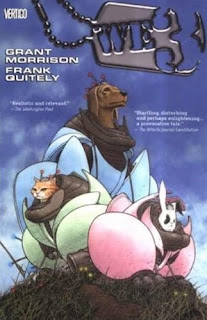 The Edinburgh International Book Festival may be the largest literary festival in the UK but Edinburgh also has one of the smallest. The West Port Book Festival was set up by the many second hand books shops that crowd together in the city's West Port, the original western gateway of the city, in the shadow of the castle itself.

The small festival begins on Thursday 24 June and runs to Sunday 27 June and they have just announced that they are to be joined by artist Frank Quitely at 3:30pm on Friday 25 June for a talk on his artwork which includes WE3 and All Star Superman. The event will take place at Edinburgh Books at 145-147 West Port where writer and editor David Bishop will chair the talk.

Tickets are free and can be collected from Edinburgh Books either from 5pm-6pm on Thursday 24 June or from 10am on Friday 25 June until they are all allocated.

There are more details of the event on the West Port Book Festival website.
Posted by Jeremy Briggs at 7:00 am