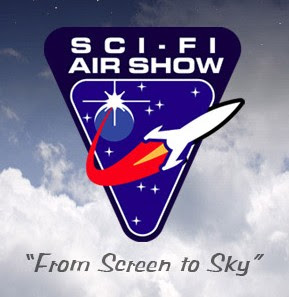 What do ILM special effects men do in their time off? For Bill George, who has an impressive CV that includes original and new Star Wars movies as well as Indiana Jones, Star Trek, Harry Potter and Twilight films, his time off is used to create models of old TV and film spaceships and then to insert them into a real world situation where, if they were indeed real, members of the public would be able to interact with them. To this end he has created the impressive Sci-Fi Air Show.

The website's concept is that the spacecraft that we saw in TV series such as Space:1999, Planet Of The Giants or original Battlestar Galactica were not special effects models but real flying vehicles built for the series that they were used in. Once the filming was completed, they passed into collectors' hands in the same way that older military aircraft can pass into civilian hands and they now have joined the real airshow circuit as many older military aircraft have. 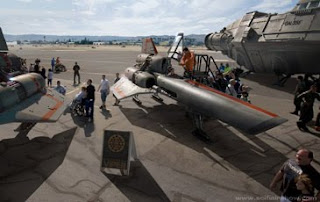 In the same way that a real air show would show off aircraft in the air or in static displays with fighter cockpits and transport aircraft holds open so that visitors can see into them, the Sci-Fi Air Show has photos of Vipers with their canopies up and Eagle transporter pods open for visitors to walk through. George has taken this one step further by providing backgrounds for some of the vehicles, from how they were designed, manufactured and flown in the series, to how they came into the hands of the current owners and the problems those owners had in getting and then keeping them air, and even space, worthy. 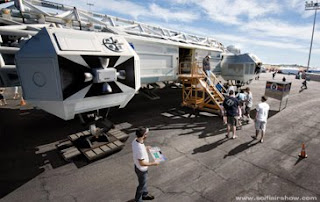 The Sci-Fi Air Show currently has three Vipers and a Galactica shuttle from original Battlestar, an Eagle transporter and Hawk attack craft from Space:1999, the Spindrift from Land of the Giants, the Flying Sub from Voyage To The Bottom Of The Sea and the Orion shuttle from 2001: A Space Odyssey. You can also see Star Trek shuttlecraft and a 2001 Moonbus in the backgrounds of some of the photos. 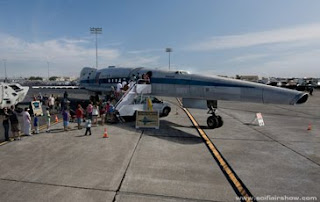 The flying craft are shown on the ground with their undercarriages deployed and often with people queuing to get a better view which, of course, then shows off the size of the original craft. It would be even nicer to see them beside real aircraft with, for instance, the Galactica Vipers beside F-16 Fighting Falcons, the real jet fighters that are nicknamed Vipers by their pilots, or a Space:1999 Eagle beside a Sikorsky S-64 Skycrane helicopter that was the spaceship's original real world inspiration. Perhaps such ideas will come in further updates to this already impressive site.

• The Sci-Fi Air Show can be found here.
Posted by Jeremy Briggs at 7:00 am