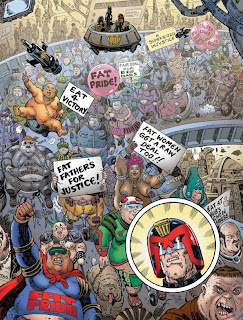 The Mighty Tharg has allowed comics artist Jon Haward to show a page from the upcoming Judge Dredd: Fat Fathers story, written by John Wagner, which will feature soon in 2000AD.

Drawn by Jon about 12 months ago - talk about working ahead! - with colouring by Chris Blythe, "I was drawing in in a tribute style to Mick McMahon," Jon reveals. "This page took me three days to draw but was such a laugh drawing it -- see if you can spot [my Wasted character] Buddha in the crowd."


Jon also tells us he should find out the next few days if The Tempest, which he drew for Classical Comics, has won a prestigious Association of Educational Publishers Award award award in the US (see earlier news story)