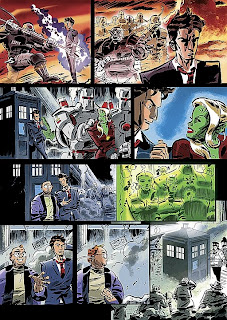 Over at the Forbidden Planet International blog, downthetubes contributor Matt Badham (that's me) talks to cartoonist Dan McDaid about his work on the comic strip in Doctor Who Magazine and Image Comics' Jersey Gods. In the interview, Dan reveals what finally made him pursue his dream of working as a comics writer and artist.

"I lost my job," he says, "and there was pretty much nowhere else to go. I’d been itching to write or draw something Who-shaped for a long, long time. Since I was a boy, in fact. And losing my job with... Scots publisher DC Thomson gave me the kick up the arse necessary to send out some samples." (Above: A page from Dan McDaid's Hotel Historia strip from Doctor Who Magazine)

"I’m optimistic about comics as a medium – I think graphic novels do well in bookshops now and kids really do like reading them – but I don’t know whether there is an ‘industry’ anymore."

One part of the industry that is thriving is the self-publishing scene, which will no doubt receive some representation at the forthcoming Bradford Zine Fayre. The Forbidden Planet International blog has details:

"The event is scheduled for Sunday the 20th of June at the Impressions Gallery on Centenary Square, with evening shenanigans to follow at the 1 in 12 Club on Bradford’s Albion Street afterwards; check the sites or contact them at bradfordzines (at) hotmail dot co dot uk for more details or to take part."

Meanwhile, those comics fans whose tastes are for super hero slugfests and in particular the four-colour antics of Marvel heroes such as Captain America, Spider Man and the Hulk, could do worse than check out the new Madame Tussauds’ Marvel Superheroes 4D Exhibition, which we've already mentioned here and is, according to a review at Rich Johnston's Bleeding Cool, worth a look:

"...overall: its fun," writes Hannah Brown for Bleeding Cool. "Hands up who doesn’t want their picture taken hanging off the ceiling with Spiderman, who hasn’t idly wondered what it would be like to have those claws or join in an epic superhero battle. Anyone? Didn’t think so. Well worth a visit." (Look out for a competition to win tickets here later in the week)

And finally, cartoonist Marc Ellerby has posted (a few weeks ago, but I've only just spotted it) a comprehensive account of his visit to Toronto, Canada to attend TCAF (the Toronto Comics Art Festival). In his report, Ellerby bemoans the state of British cons, which he finds sadly lacking in comparison to their Canadian counterpart:

"The thing with British shows is that there's very few that I actually want to attend nowadays. Previous trips to Bristol and Birmingham have been expensive and without much reward as they're catering for a mainstream, diehard comic audience who are very happy to pay £12 a day just to get into the venue."

The whole report is definitely worth reading, even if you don't entirely agree with what this promising cartoonist is saying...
Posted by Matt Badham at 8:45 am