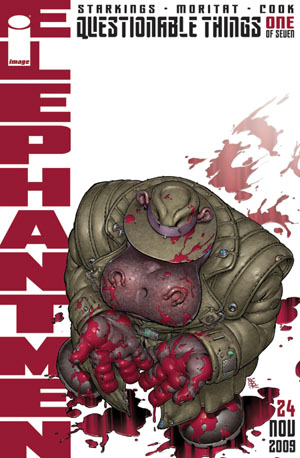 Elephantmen, the creation of former Marvel UK Managing Editor Richard Starkings and Chief Tiger of Comicraft and publishing house Active Images, has been optioned as a movie.

Comic Book Resources reports that Richard announced that his creator-owned series Elephantmen has been optioned to be “a major motion picture,” over the weekend at WonderCon, San Francisco. He added that directors and actors are currently being approached.

Originally created by Starkings as a spinoff from another of his comics, Hip Flask, Elephantmen takes place in a dystopian future in which human/animal hybrids struggle to integrate into society after being rescued from a brutal life as mindless, corporate soldiers.

Artists on the title include the brilliant Boo Cook, Moritat and Ladronn.

The series will reach issue Issue 25 later this month and the anniversary issue features 25 pages each drawn by a different artist. Among those recruited are Tim Sale, Dave Gibbons, Ian Churchill, Whilce Portacio, Paul Grist and Dougie Braithwaite.

Richard's latest success getting his creation optioned is well deserved, considering his lifelong dedication to comics and comic creation. He pushed Marvel UK toward experimenting with US-sized comics such as Dragon's Claws and Death's Head back in the 1980s, along with masterminding the creation of hugely successful weekly comics for the comic such as The Real Ghostbusters which helped launch the comics careers of a number of British writers and artists, including Dan Abnett, John Freeman (who?), John Carnell, Andy Lanning and many others.

Richard, who founded lettering company Comicraft in 1992, counts font design, comic book lettering, editing and writing among his many talents and was of course one of the early pioneers of computer-based comic book lettering. Active Images began in 1995 and began publishing comics - including Hip Flask - in 2002. His Balloon Tales web site is an invaluable resource for new letterers.