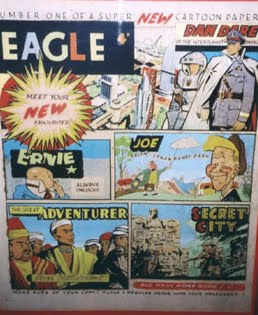 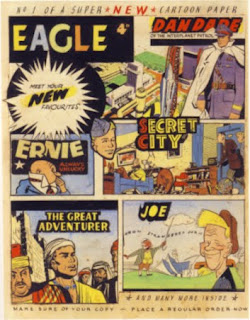 With the 60th anniversary of Eagle fast approaching (14th April 2010) now seemed like a good time to have a look at what that iconic front page of Eagle magazine might have ended up looking like.

Shown here are two of the dummies that Eagle's founders, Frank Hampson and Marcus Morris, put together to sell the idea of Eagle to a sceptical publishing world (Click the covers for larger images).

Both images shown space hero Dan Dare prominently (albeit in purple, so the strip doesn't quite yet have that 'RAF in Space' vibe) and have strips that would make it into the first issue of Eagle (The Great Adventurer and Rob Conway - as Secret City was renamed).

Who can say what became of Ernie and Joe of Strawberry Farm, apart from the fact that they were never seen again. 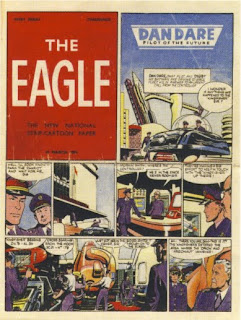 As the launch date got closer, so further issues had to be mocked up to show what the magazine would look like. The image here shows what a transformation has taken place since the initial dummy magazines were put together.

This is much closer to what the eventual second issue would look like but there were still a number of alterations to be made. Space Fleet are all still decked out in gorgeous purple rather than RAF green, the Eagle bird has yet to make it onto the front cover, the famous Eagle font has yet to be designed by Ruari McLean and the Dan Dare logo is not quite ready. 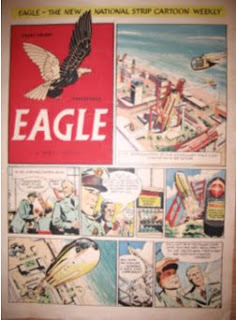 Production work continued as the launch date got ever closer until the first issue of Eagle was deemed ready to show the world. To publicise the title the publishers, Hulton Press, produced this final draft version.

It was in full colour but was only eight pages long (eight black and white pages would be added to the actual first issue), was dated 21st April 1950 (so as not to give the actual launch date away) and is missing that iconic "Dan Dare, pilot of the future" masthead in the first frame.

In the next part of this celebration of Eagle at 60 we'll look and see what was actually in the first issue of Eagle.

• For up to date news on all things Eagle why not go to the eagle-times.blogspot.com/

• Lew Stringer's Eagle 60th Anniversary Post on Blimey! It's Another Blog about Comics
Posted by Richard Sheaf at 9:54 pm

I know April 14th 1950 is usually considered the launch date for Eagle but did it have a cover date of a week ahead like other comics? If so, when was the actual launch date? Anyone know?