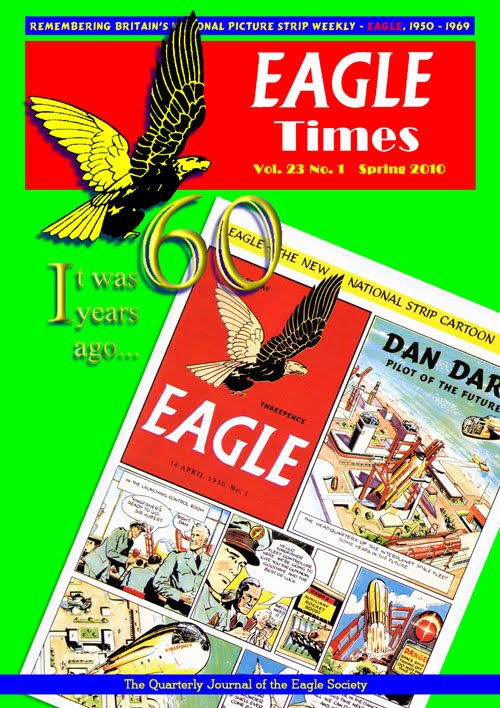 The latest issue of Eagle Times (Volume 23 No 1) is now available from the Eagle Society and, naturally enough, is an issue dedicated to the impending 60th anniversary of The Eagle on 14th April.

The issue includes an examination of the career of Sergeant Bruce, whose single-episode exploits ran for nearly four years in the 1960s Eagle, firstly as 'Sergeant Bruce, C.I.D.' and then in 'Can You Catch a Crook?'; a tribute to Geoffrey Bond (1920-2009), best known as the writer of 'Luck of the Legion' and who wrote the 'Justin Tyme' strip for Eagle Times; reminiscences of some of Ron Embleton's 'discarded' artwork; and a look at the life and career of Paul Trevillion, better known for his sports illustrations and his work on 'Roy of the Rovers' for Tiger, who drew some of the 'Can You Catch a Crook?' and 'U.F.O. Agent' strips in the 1960s Eagle. 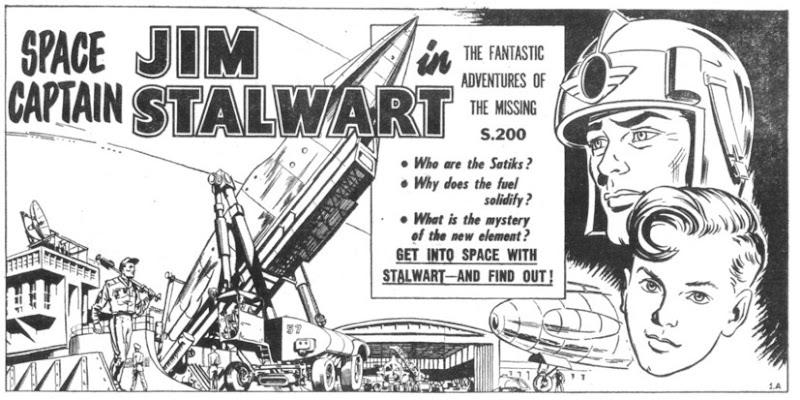 Of particular interest to downthetubes fans, will be our very own Jeremy Briggs' feature on Jim Stalwart, Dan Dare artist Bruce Cornwell's 'forgotten' Space Captain, whose exploits graced the pages of the Junior Mirror in 1954.

Also featured is a revisit to the Eagle connections with Ladybird Books, including some examples of the work of Roy Worvill (writer) and covers by the artists Robert Ayton, Frank Hampson, Frank Humphris and Martin Aitchison, including a Humphris 'Ladybird' Rough, showing the sketch which led to one of the full-page illustrations in the Ladybird book.

• Membership of the Eagle Society entitles you to copies of Eagle Times, which is published four times annually. The Subscription rate for 2010 is: UK £23, Overseas £34 (in £s Sterling, please). Apply by snail mail to: Keith Howard, 25A Station Road, Harrow, Middlesex HA1 2UA United Kingdom. Enquiries: eagle-times@hotmail.com
Posted by John Freeman at 12:43 am