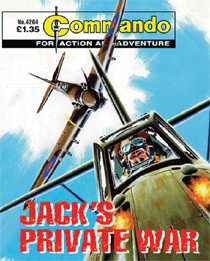 In case it has passed your notice, Commando have been having a mini celebration of Ian Kennedy's work for the title as it is 40 years since he first produced a cover for them.

As we have previously reported, the last batch of Commandos included a reprint of the issue that had that first cover, Seek And Strike, with its image of a German Stuka dive bomber beginning its attack on an allied aircraft carrier in the Mediterranean. Also included in that batch of Commandos was the Vietnam war story Cougar Squadron for which Kennedy produced not just the wraparound cover but also the internal artwork as well.

While he did internal artwork for many of the IPC picture libraries in the 1960s, Ian Kennedy has only ever done the internal art of five different Commandos. Of those five, the current batch of Commandos on sale now includes the World War II based Jack's Private War (the third time this particular story has been published in Commando) and the Korean war based Fury Strike. Effectively these are as close to Ian Kennedy graphic novels as it is possible to get today.

The only publication other than digests that we can think of that could be considered a Kennedy graphic novel is issue 16 of DC Thomson's Red Dagger from almost 30 years ago which reprinted his Tiger McTaggart stories from Wizard in one 64 page A4 magazine behind a typically excellent painted Kennedy cover. If DC Thomson were ever to start releasing graphic novels of reprinting stories from their many comics, we would certainly expect to see Ian Kennedy's work amongst them.

The covers painted by Ian Kennedy for the four Commandos mentioned above are all available as wallpapers on the official CommandoMag website. Seek And Strike and Cougar Squadron are here, while Jack's Private War and Fury Strike are here.

• Commando Strikes: the latest issues on sale now are listed here on downthetubes
Posted by Jeremy Briggs at 7:00 am

Not quite a graphic novel in length, but Kennedy illustrated a Scalextric brochure with a character called Speedmaster I think. The brochure was effectively a glossy A4 colour comic, of around 24-36 pages.

I would cast my vote for a modest collection of reprinted Ian Kennedy work - I'd buy it now!