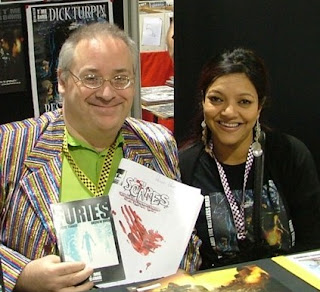 Congratulations from all here at downthetubes go out to Steve and Suzanne Tanner of Time Bomb comics on the arrival of their very own little bomblette.

Sasha Joyce Tanner was born in the early hours of 31st January and weighed in at 6.8lbs. New dad Steve reports, "She is fit and healthy, her mother is tired and happy, her father is overawed and gobsmacked. "
Suzanne had been showing off her baby bump at the Thought Bubble comics convention last November so with baby Sasha at least used to the noises of a comics convention we are wondering when she will be putting in her first public appearance at one. Could she be the youngest attendee at Hi-Ex in less than two months time?
Posted by Jeremy Briggs at 10:51 am