Razorjack On Sale This Week 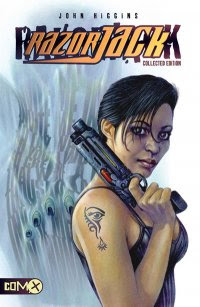 John Higgins collection of Razorjack, which includes a new four-page strip, goes on sale in the UK in all good comic shops this Thursday (2nd April).

The collection has been published by revived indie Com.x, headed up by publisher Eddie Deighton (see news story). Their first new collection, Cla$$war Series One is already instore in the UK and sellling fast.

In Razorjack, a sequence of bizarre events create an unstable nexus that enables the death-bitch, Razorjack, and her twisted handmaidens the opportunity to finally break through into our world the most important dimension of them all The Core Dimension. Three college kids inadvertently create the opening from the alternate universe of The Twist Dimension and become a focus for the evil that is Razorjack.

Maverick cops, Frame and Ross, are assigned a disturbingly horrific multiple-murder case which draws them into what is potentially the final battle between good and evil...

"All I had wanted to do with Razorjack was to create my own world outside of what I had been commissioned to do all my professional life," says John, whose past credits include strips for 2000AD, The Hills Have Eyes and Thunderbolt Jaxon. "It kept me entertained writing, drawing and colouring it on and off for around ten years.

[Razorjack] is not profound, it won’t make you look at the world around you in a different way and it will never win the Nobel Prize for literature. (Although it would be nice to be nominated). But anyway, it is just a horror story populated by weird creatures, with colourful art and nice designs!"

• John will be doing a Razorjack signing at Orbital Comics in London on Saturday 18th April 2009
Posted by John Freeman at 9:38 pm