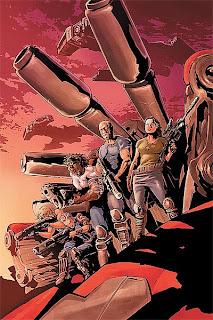 Top British comics creator Simon Furman may have been quiet of late, but this doesn't mean he isn't busy. In fact, when he called downthetubes last week it was clear the writer, whose credits range from Transformers to Doctor Who, and who cut his teeth on titles such as Fleetway's Scream! 25 years ago, has plenty to keep him occupied.

Top on his agenda is probably Starcraft (a new ongoing monthly comic for US publisher Wildstorm, based on the hit computer game from Blizzard Entertainment, which kicks off in May, co-written with artist Keith Giffen with art by). The book centres on the WarPigs, a disbanded team of outlaws reunited by their former captain for one last job: assassination...

Also in the works is an Ironhide/Optimus Prime story in an upcoming issue of All Hail Megatron: Coda, two (currently) top secret Transformers Spotlights for IDW. Via his blog, Simon also reveals he's also working several books: Rad Robots for Kyle Cathie, Transformers: The Art of the Movies for Titan and Transformers: The Movie Universe for Dorling Kindersley and Volume 2 of Titan’s Transformers UK.

The big news though is a movie script, "something that’s been kicking around for a while but now has an actual option attached," Simon reveals. "That last one may well have to remain under wraps for a while yet, but more on that when I can."

• Starcraft #1 is on sale from Wildstorm via comic shops on 27 May: more infon on the Wildstorm site
Posted by John Freeman at 4:38 pm