Exciting news just in: outstanding illustrator Oliver Frey, whose work includes The Trigan Empire has agreed to join the Great British Comics panel at ComICA next Sunday (23rd November), London to discuss his work, which is featured in David Roach's new artbook from Carlton, The Art of War. 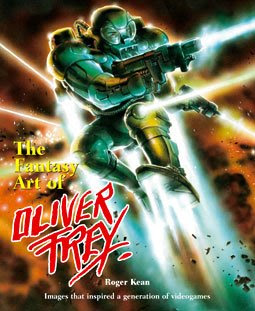 Described as one of the most important artists working in the medium of commercial illustration, Frey worked on some of Britain’s greatest comic institutions -- the Fleetway War Picture Library, Dan Dare in Eagle, and The Trigan Empire in Look & Learn (as well as providing many stunning illustrations) following the departure of Don Lawrence. He also created the 1930s-style opening sequence for the film Superman: The Movie.

But for an entire generation of boys in the 1980s, it's Frey’s exuberant art on the covers of cult computer games magazines such as Crash and ZZap that came to express the sheer excitement of the games they played — heroes, space ships, villains and action!

Don't miss this rare opportunity to meet one of the legends of British comics art, who will be signing this book and his own, The Fantasy Art of Oliver Frey, after the panel, 3.30-4pm in the ICA Bar.

The panellists at the Great British Comics event will be discussing how the comics of our childhoods stand up to today. Boyfriend, Eagle, Battle, Rick Random and more are being reappreciated thanks to a wave of compilations, artbooks and studies. Steve Holland, David Leach, David Roach and Frey examine the creators behind these wizard wheezes and ripping yarns.

In the second part, cartoonists Adam Brockbank, John and Patrice Aggs, Gary Northfield and Sarah McIntyre from new weekly The DFC compare notes on how to make comics appeal to 21st century kids.