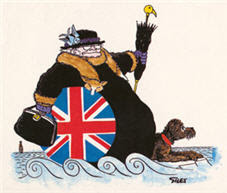 The 14th Cartoon Art Trust Awards were presented at an entertaining fundraising dinner at The Mall Galleries in London yesterday, an event which celebrates and coincides with the opening of Giles – One of the Family exhibition at The Cartoon Museum. Here are the winners... 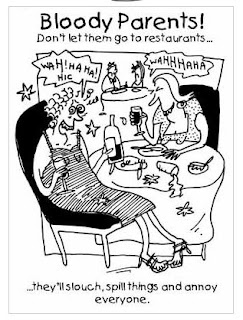 • Giles' Grandma (aka Libby Purves) presented The Joke Award, sponsored by The Daily Telegraph to Hove-based cartoonist Grizelda, whose cartoons and strips have featured in publications such as The Sunday Times, Private Eye, The Big Issue and The Oldie.

• Simon Hoggart presented the Strip Cartoon Ward, sponsored by Private Eye, to London-based cartoonist Stephen Collins, whose work appears in titles such as the The Times (which regularly features his caricatures), The Guardian, The Independent, The Wall Street Journal and NME. Stephen specialises in contemporary caricature, general editorial illustration and cartoons. He is currently working on a longer comic, "more a graphic novel really", he reveals on his blog, "though I'm just dipping my toe in the water by contributing a five-page tester-section of it to an anthology of artists under the loose title of 'Landscapes'."

• Kenneth Baker presented the Pocket Award, sponsored by The Daily Mail, to Jeremy 'Banx' Banks of the Financial Times. Banx, who has been the FT's daily cartoonist since 1989, will perhaps best known to regular downthtubes readers for his contributions to the 1980s humour comic Oink, but his strips have also appeared in Private Eye, She, the Mail on Sunday, the News Statesman and numerous other newspapers. His books include The Dewsburys: Scenes from a Suburban Marriage...

and The Many Deaths of Norman Spittal

• Peter Brookes presented the Caricature Award, sponsored by The Times, to Nicola Jennings of The Guardian. Nicola originally trained as a theatre designer and started her professional life working backstage and designing for opera. Her caricature work began with The London Daily News in 1987 and she has since worked for The Daily Mirror, The Observer and The Guardian, which publishes her work on its web site here.

• Kenneth Clarke MP presented the Saatchi Political Award to Nicholas Garland of The Daily Telegraph. The Telegraph’s first political cartoonist in 1966, he has produced work for them ever since and his cartoons have also appeared in The Independent, The New Statesman and The Spectator. His long-running comic strip Barry McKenzie, co-created with Barry Humphries, ran in Private Eye from 1964 to 1974.
In 2005 he illustrated The Coma, written by his son Alex. "One of the phrases that cropped up often when we were talking was 'Too much information – you don't need all that.'" he told the Telegraph on its release, "and there’s always this question of taking it out. And eventually, I get right down to what I think is the thing, and I show it to Alex, and he says 'You can take that out too'."
His work is just part of the massive additions being planned for the online version of the British Carton Archive at the Univeristy of Kent, announced earlier this month (see news story).

• Anita O’Brien, Curator of The Cartoon Museum, presented The Pont Prize for drawing the British Character to Charles Peattie and Russell Taylor of the Daily Telegraph for Alex. Recently 'Alex Masterly' and Clive's adventures have ranged from Narnia to that pest of modern City life - the Blackberry. The strip has run since 1987 - an outstanding achievement. Alex was 25 then (he is now presumably 46!).
Peattie, who studied painting at St Martin's School of Art, worked as a portrait painter in the 1980s, then as a freelance cartoonist and designer of greetings cards. He also produced (with Mark Warren) the legendary Dick cartoon in Melody Maker. As well as Alex, he's currently developing comedy scripts for a number of TV projects. Russell met Charles at a Christmas party in 1986. who had a commission for a strip for the financial pages of the incipient London Daily News. The result was Alex.
The Pont Award for drawing the British Character was set up five years ago in memory of Graham Laidler, whose brilliant series ‘ The British Character’ in the 1930s and 40s are still as wonderfully funny as when he drew them seventy years ago. He died tragically young aged 32 in 1940.

, who is widely admired as a cartoonist, illustrator and teacher.
The creator of the acclaimed books The Snowman, Father Christmas and When the Wind Blows, like Bryan Talbot he has been responsible for some of the earliest British ‘graphic novels’, long before the term or the form was generally known. He has been praised by Posy Simmonds for producing work which is ‘not only passionate but also tender and funny.’
Previous winners of the award have included, Ronald Searle, Gerald Scarfe, Fluck and Law and ‘Trog’.

• The Giles - One of the Family exhibition at the Museum, which runs until 15th February 2009, showcases the work of Carl Giles (1916-1995), the most famous cartoonist of his generation and creator of the much-loved ‘Giles Family’. Born during the First World War in Islington, he was the son of a tobacconist and grandson of a jockey who had ridden for Edward VII. He joined the Daily Express in 1943 where he would create his quintessentially British ‘Giles Family’ headed by the redoubtable Grandma. For many people his cartoons capture British life in microcosm, and perhaps for this reason Giles was voted Britain’s Favourite Cartoonist of the 20th century in a 2000 poll.

The exhibition of over 80 works includes wonderful colour covers as well as drawings never reproduced in the annuals. His studio is recreated complete with desk, drawing board, reference material and many of the dozens of toys given to him, some made by his fans. Also revealed are less familiar aspects of his career including his time as an animator, his propaganda work for the Ministry of Information and his work as cartooning war correspondent for the Express.

• More information about the exhibition at: www.cartoonmuseum.org