DFC in Tescos Next Week! 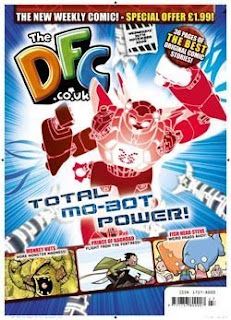 The DFC, the weekly British comic until now only available on subscription is to be trialled in a major British supermarket next week.

The DFC is normally only available by subscription, but for one week only (26th November to 2nd December) it will be on sale in Tesco stores for just £1.99: a fantastic way to sample this top comic and get kids reading.

Packed with original stories, fantastic comic strips, games, puzzles, jokes and more, The DFC is created by the crème de la crème of British talent such as acclaimed authors Philip Pullman and Peadar O'Guilin as well as children's book illustrator Nick Sharratt and comic greats Dave Shelton, Sarah McIntyre and Neill Cameron. It has absolutely no advertising and is 36 pages of pure story.

"I think it's a great chance for anyone who's been curious about The DFC but hasn't yet jumped onboard and subscribed to check it out for themselves," says contributor Neill Cameron, who draws Mob-Bot High for the title.

News on the Tesco trial has met with mixed reaction from some comics fans and retailers. While welcoming the chance for The DFC to be seen by a wider audience, some have complained the publishers have side stepped the core comic audience that could be reached via specialist comic stores.

Personally, while I'm not a fan of all supermarkets' usual policy of "cherry picking" only the best selling book and magazine titles for their shelves, thereby threatening the sales of smaller busineses, I think these complaints are baseless. For a start, because of the way newstand comics are distributed in the UK, few comic shops stock them -- including best selling titles such as The Beano and Simpsons Comics -- so their customers would not necessarily expect to find The DFC in store.

Secondly, publisher David Fickling has already said he would be happy to explore that option (you can read his views on The DFC's subscription-only distribution here on the main downthetubes site) but so far, downthetubes has yet to hear of one comics disttributor or major comic stroe chain that has offered to stock it. (If they have, then we'll be happy to mention it on these pages).

• For more information on The DFC go to www.thedfc.co.uk
Posted by John Freeman at 9:48 am