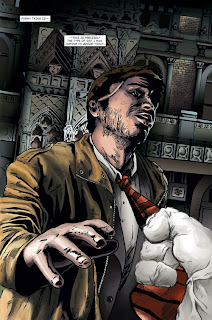 Cancertown (out at the end of the year from Insomnia Publications) is a new original graphic novel from British comic writer Cy (Starship Troopers) Dethan with art by Stephen Downey, colours by Melanie Cook and letters by Nic Wilkinson.

It's the story of a former mental patient with an inoperable brain tumour who conducts search-and-rescue missions into a monstrous, alternate version of London. The guy's name is Morley, and he suffers from a rare mental disorder that causes him to believe a number of weird things about himself and his relationship to the outside world.

The major upshot of this is that his delusions manifest themselves in a twisted alternate world he calls Cancertown. The real fun for Morley began when dispossessed people - those who were lost or who had a diminished sense of their own identity - started to fall into Cancertown and Morley decided that his purpose in life was to find those people and return them to the real world before they became permanent residents.

There's a lot more to Cancertown, of course, described by Cy as Chinatown meets the Wizard of Oz, including monsters, ganglords and a horrifically scarred burn victim whose connection to Cancertown seems every bit as strong as Morley's - but that's the basic set-up.

• More details on Cy Dethan's website - including some preview pages and character concept sketches.
Posted by John Freeman at 8:39 am