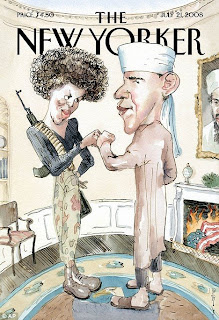 Guardian cartoonist Steve Bell has sprung to the defence of the New Yorker magazine, currently embroiled in controversy for its latest cover depicting US presidential candidate Barrack Obama and his wife Michelle.

Barack Obama supporters are said to be furious that the cartoon depicts him and his wife as Muslim terrorists. In response, the magazine has insisted that the cartoon is meant to satirize opposition slurs on Mr Obama, and is not itself an attack.

On Tuesday, Obama told CNN's Larry King. that the satirical cover, depicting him and his wife as flag-burning, fist-bumping radicals, doesn't bother him but that it was an insult to Muslim-Americans.

Reaction to the cartoon has been mixed, earning the New Yorker support from unusual sources. Right-leaning news channel Fox News' Greg Gutfeld immediately spotted the cartoon wasn't meant to bash Barack, "rather it was an attack on his critics — a commentary on those who sensationalize Obama's perceived flaws.

"Basically The New Yorker cover suggests that anyone who finds Obama to be less than a cross between Jesus Christ and gorgeous unicorn, to be a racist creep."

USA Today's Chuck Raasch noted the cartoon "offended many, including John McCain. But as crude and offensive as it was, the cover was tame next to other Internet rot, not all of it aimed at Obama. The ageism directed at John McCain is prevalent, too."

Steve Bell, no stranger to controversy about his own work, feels the New Yorker cover falls into the category of cartoonists going too far -- which is exactly what they should do. "Having seen the full image (along with unimaginable numbers of idiots and psycho-paths worldwide), I can say that I rather warm to it," says Bell. "I look at it, and it works, for me anyway."

Often attacked for his portrayal of some British politicians, Bell argues cartoons -- many drawn by some of the most paintstaking, shyest and most timid people on Earth - need to be disturbing, and they should also dare to ask questions.

"People in the US aren't generally fools (even though the fools have been over-represented of late, particularly in the current administration), though some may be a little over-literal, and these are not always the psychos... But whether a cartoon is funny or not is one judgment that is always going to remain subjective."

Writing for the Daily Telegraph, cartoonist Christian Adams felt the cover missed its mark. "All cartoonists have one simple task. To get their message over visually in roughly three seconds. This is how long a reader will take to glance at their work. That's it. It has to be bold, then intriguing, then acute, and then, hopefully, funny. In three seconds.

"The New Yorker Obama cover may well be all of these, but unfortunately, thanks to the world wide web, it has been a victim of its own wit... taken out of context, [the cartoon] can mean whatever you want it to. And here we come to the internet. Seen on its own, scattered randomly over the internet, with no knowledge of what the New Yorker's mindset is, this cartoon can be interpreted however you wish."

Meanwhile, a New York Times article on how difficult it is to make jokes about Obama quotes comedian Bill Maher made a good point: "If you can't do irony on the cover of The New Yorker, where can you do it?"
Posted by John Freeman at 11:13 am