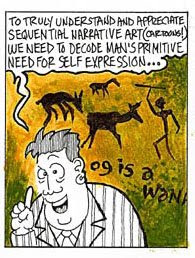 (with thanks to Robin Ashwell): The BBC online News Magazine has just published an article on newspaper comic strips -- and is challenging readers to send in their own four panel creations.

The article, published to publicise self-taught artist (and occasisonal DJ, raconteur etc) Phill Jupitus' documentary Comic Love on Radio 4 (available at Radio 4's Listen Again site), notes that for as long as there has been the concept of daily newspapers, there has been the political cartoon. And in the 20th Century there has been a natural symbiosis between the modern newspaper and one particular form of cartoon, the four-panel strip.

The article notes the work of the creators of the Daily Telegraph's Alex strip, the controversy caused by Gary Trudeau's Doonesbury - including audio interviews with the US cartoonist - and features an exclsuive strip by Phil Jupitus himself (first panel above).

Readers -- and several have already commented on the article noting their favourite strips -- are also challenged to send in their own four-panel strips:
Posted by John Freeman at 7:35 am