Nice To Have A Friend 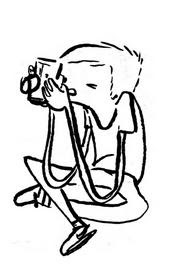 Comic artist James Nash has a new comic available called It's Nice to Have a Friend Such as Yourself, collecting all the diary drawings that he did in 2007.

James started a diary strip "just to explore the idea that the subjective language of comics could communicate something as objective and personal as a person's diary," he says. He's been doing his comics diary fro about four years. "I began putting the drawings together as a collection and, along with some friends similarly interested in comics, began exploring the idea of self publishing our work and distributing it via the small press community.

Copies of It's Nice to Have a Friend Such as Yourself are available from Gosh! in London, Dave's Comics in Brighton and Platform Clothing in Birmingham.

Alternatively, if anyone would like to recieve one directly from the artist, then please contact James direct via jamesnash61 AT hotmail.com

James will also be running a diary comics workshop and have copies available at the V&A Museum as part of the Bad Idea exhibition and anthology launch at the end of this month (May 2008).