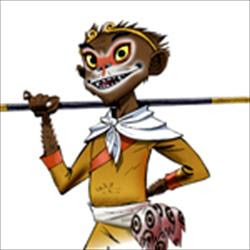 Comic artist Jamie Hewlett and Blur band member Damon Albarn are to provide visuals for BBC Sport's marketing campaign and titles for the forthcoming Olympic Games, based on the traditional Chinese folklore Journey To The West.

The campaign, which will air in late July, will include animations and music especially produced by Hewlett and Albarn. with BBC Sport Executive Producer Jonathan Bramley describing the project as "a really exciting collaboration.

"To work with such renowned artists as Jamie and Damon is a real plus for BBC Sport," he said. "Their treatment of the trail and titles will kick start our Olympic coverage in a really different, energetic way."

London-based Hewlett (perhaps best known to comics fans as the co-creator of Tank Girl and the band, Gorillaz) worked with Albarn alongside the BBC to adapt Journey To The West, an epic quest for enlightenment, into the Olympic trail and titles, developing the animation and music especially for the BBC.

The BBC says campaign will feature the characters of Monkey, Pigsy and Sandy using Olympic sports on their journey to Beijing and the Bird's Nest stadium. The sports represented include gymnastics, hammer, sprinting and diving.

"The idea is that you tell the entire story of Journey To The West in a two-minute opening sequence," expalined Hewlett, "which is basically them on their way to the Olympic stadium, the Birds' Nest stadium."

The Beijing Olympics marketing campaign will feature promotional activity across TV, radio, online, mobile and interactive, and will also play throughout the Beijing Olympics programming via title sequences, in programme graphics and set design.

BBC Sport Marketing worked with retained agency RKCR to develop the strategic direction and creative realisation of the idea while Red Bee Media produced the trails and title sequence with Zombie Flesheaters (you've got to love that company name!) and Passion Pictures.

The aim is to target younger audiences through high profile websites such as Facebook, Bebo, MSN and social networking sites as well as mobile activity.

• The Journey to the West folklore is based on characters taken from the story of Monkey King, one of the four classic novels written by Wu Chen-en during the Ming Dynasty (1500–1584). The story has many layers of meaning and may be read on many different levels such as a quest, fantasy, personal search for self-cultivation, or a political/social satire.

The myths have also inspired comics, manga, anime and games. but in the West, its best known modern interpretation is probably the 1970s TV series Monkey, translated into English by the BBC. You have to wonder if they'll repeat it. (The complete series was released on DVD in 2004).

In 1986 Chinese Central Televsion made Journey to the West, noted for its faithfulness to the original novel and considered by many as a classic. The SciFiChannel made The Monkey King in 2001, also called The Lost Empire.

The story is an account of a monk, Xuan Zang (602-664), who went to India in the 7th Century to seek Buddhist scriptures to bring back to China.
Posted by John Freeman at 2:49 pm