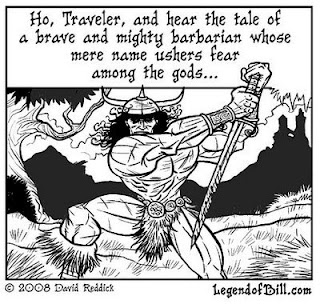 Cartoonist David Reddick has unveiled his new webcomic and labour of love, Legend of Bill.

"It's a series set in a realm of swords, sorcery and stupidity!," says David, who I've known for a while now since my time editing Star Trek Magazine for Titan.

The series centres on Bill, a man who tires of his 9 to 5 office job as a file clerk intern at the local castle. So he quits and sets out on adventures with Frank, his faithful lil’ blue dragon friend. But no one said it was going to be easy...

"Bill and Frank are a couple of characters fed up with their everyday existence and desiring something more out of life," says David. "Something I think we can all relate to in one way or another."

David Reddick is a professional cartoonist and creator who, in addition to Legend of Bill, also draws "The Trek Life" for the official Star Trek web site www.STARTREK.com, "Gene's Journal" and "Rod & Barry" for www.Roddenberry.com, and is a staff cartoonist at Paws, Inc., where he works on the Garfield comic strip.

• New strips will be published on the Legend of Bill every Tuesday and Thursday.
Posted by John Freeman at 10:23 am