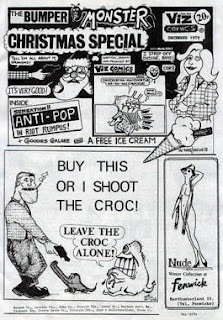 The BBC2 programme The Comedy Map of Britain turned its attention to the North East of England for the third programme of the second series.

Having previously been to the impressive century old headquarters of D C Thomson in Dundee to cover the Beano, this time they went to a terraced house in Newcastle-Upon-Tyne's Jesmond district.

Not just any terraced house of course but the one owned by the parents of Simon and Chris Donald - parents who were blissfully unaware of their off-spring creating Viz in their front bedroom. There, the brothers reveal that the way they avoided showing their parents a copy of the comic was to keep telling them that it had sold out.
Selected clips are available on the programme’s website. To view the clip from Jesmond, select the Newcastle To Leeds programme and The Viz Boys Return To Jesmond clip.
Posted by Jeremy Briggs at 3:48 pm