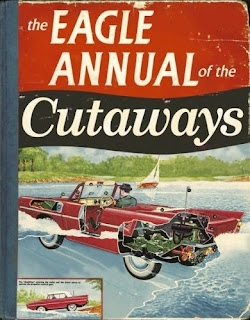 (With thanks to Will Grenham): Last September, Orion published the rather confusingly titled Eagle Annual: The Best of the 1950s Comic, which reprinted pages from the first decade of the weekly Eagle comic.

It was a nice nostalgic book, but was criticised at the time for its intentionally distressed look -- a design element restricted to the cover but also carried over into the internal pages. Today's collectors may almost always see the surviving red covered, half century old, Eagle annuals in a distressed condition, but surely the designers would have realised that the target audience of nostalgic grandfathers remember the annuals from their childhood in the immaculate condition they were in when they originally received them as gifts.

At the end of that book it promised a second book to be published in Autumn 2008 covering the 1960s Eagles. This second book has been bumped back a year to 2009 and in its place, with an only slightly less unwieldy title, is The Eagle Annual of the Cutaways.

The new book retains the distressed cover style of the first and based on the illustrations from the book featured in the Daily Mail, the modern day book designers have been reformatting the text around the cutaways. Compare the original Avro Vulcan B1 cutaway from Eagle Volume 9 Number 20, dated 16 May 1958, by Eagle's undoubted cutaway master Leslie Ashwell Wood, with the new version with its reformatted Introduction and Key To How It Works.

While Ashwell Wood painted the numbers onto the artwork, all the text was added during production based on his pencil notes sent with the artwork. In the case of the Vulcan, the book designers have also elected to move the plan views of the bomber at the right hand side of the art.

Yet for all the changes that may have happened, this book could well be a 'must buy' for those interested in the Eagle cutaways as, according to amazon.co.uk, for a cover price of £14.99 it has 326 pages, almost twice the number of last year's book and over three times the number of pages contained in Denis Gifford's 1988 book, The Eagle Book of Cutaways, (also available from secondhand dealers via amazon and priced at nearly £30).

• The Eagle Annual of the Cutaways is currently scheduled to be released on 18 September 2008 and is available to pre-order from Amazon.co.uk
Posted by Jeremy Briggs at 8:24 pm