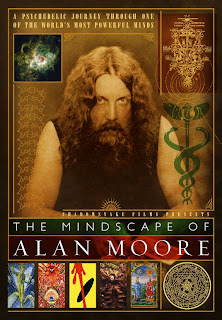 (via the Forbidden Planet International blog): Great Britain’s Comics Alchemist in Extraordinary Alan Moore will be appearing at London’s Orbital Comics (148 Charing Cross Road) on the 24th May to promote the new DVD The Mindscape of Alan Moore, a 2003 feature documentary distributed by Shadow Snake which chronicles Alan's life and work.

The Mindscape of Alan Moore is Shadowsnake’s first completed feature project, part One of the Shamanautical / 5 Elements series. It is the directorial debut of DeZ Vylenz and is the only feature film production on which Alan Moore has collaborated, with permission to use his work.

Alan Moore presents the story of his development as an artist, starting with his childhood and working through to his comics career and impact on that medium, and his emerging interest in magic.

The film features the first film adaptations of scenes from Moore's acclaimed series V for Vendetta and Watchmen, shot in early 2002. Another key scene features a direct reference to the character of John Constantine from the comic book Hellblazer.

a portrait of the artist as contemporary shaman, someone with the power to transform consciousness by means of manipulating language, symbols and images.

The film leads the audience through Moore's world with the writer himself as guide, beginning with his childhood background, following the evolution of his career as he transformed the comics medium, through to his immersion in a magical worldview where science, spirituality and society are part of the same universe.

You can read a review of the film by Daniel Etherington on the Film4 web site.

There’s also a Polish launch of the DVD coming up on 25th June at the Oúrodek Postaw Twórczych (the Creative Art Center) in Wroclaw; the US official release by the Disinformation Group will be in September.
Posted by John Freeman at 9:15 am