Who's the Best Who? 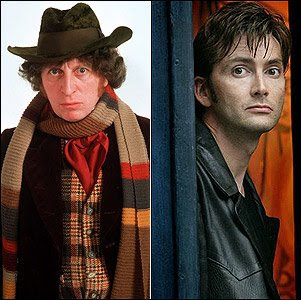 ... the answer, I've always believed, is that the best Doctor Who is almost always the one you grew up with. It's no surprise then that, given the modern show's target audience (a recent Broadcast feature indicated this is anyone from 8 - 12), David Tennant recently won the "Best Doctor" award in Dcotor Who Magazine.

But it's a testament of the times, and the sheer ratings success of the new Doctor Who that the Daily Telegraph this week took up the gauntlet and challeneged writers Dominic Cavendish and Sarah Crompton to argue the case for their favourite Time Lord - Tom Baker or David Tennant?

Cavendish plumped firmly for 1970s Fourth Doctor Tom Baker, arguing that special effects-wise, "I concede that there's no contest" between the original Doctor Who's then cutting edge effects (no, really) and "Today's CGI technology" which "leaves the attempts of yesteryear, however noble and occasionally successful, looking decidedly kindergarten by comparison.

"But they just don't make Doctors like Baker any more," feels Cavendish. "In fact, they only ever made one, and I doubt very much whether, if he hadn't filled Jon Pertwee's shoes, we'd be watching Doctor Who today."

Crompton much prefers Tennant, arguing "Baker's performance itself, though vivid, is so mannered and eccentric that it is hard to care about him or his companions. And that voice! So rich it sounds false, heightening the essential unreality of the entire concept."

"Tennant brings real intelligence to his portrayal. As the plot lines extend all over the place, he is capable of expressing everything from love (when he becomes a man in The Family of Blood) to awe (faced with the sight of other planets) to the chill of fear at planetary extinction."

While the ensuing debate among the newspaper's readers proved polarised - with many casting thier vote for Patrick Troughton and William Hartnell, evidence no doubt of the paper's target audience fro all its many revamps - it's fascinating to see a daily quality newspaper like the Telegraph even publishing an article like this about an SF TV show. While debate rages among some new and old fans about the overall quality of the show, that the series has pushed SF centre stage is a testament to the success of the production team and cast.

One has to wonder just why ITV hasn't countered with its own revival in addition to the new Primeval. The Tomorrow People, anyone? UFO? Sapphire and Steel?
Posted by John Freeman at 10:23 am