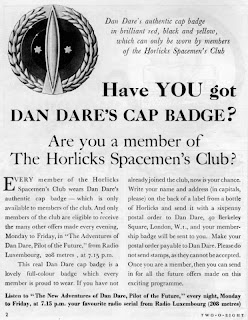 First broadcast in the 1950s, Radio Luxembourg's Dan Dare Radio Show has become something of a 'Holy Grail' for fans, some still believing copies of the series may yet be found.

Aired on Radio Luxembourg between July 1951 and May 1956, the series, based on the first Dan Dare comic story from Eagle, was made on wax discs that were then sent to Luxembourg to be broadcast.

The Dan Dare Info site reveals Bob Danvers-Walker announced the Adventures of Dan Dare, whilst former Dick Barton actor Noel Johnson took the part of Dan, Digby was played by John Sharpe, Peabody by Anne Cullen, and the Mekon by Francis De Wolfe. Other parts were played by Kenneth Willams and Ralph Richardson. The series was produced in London by John Glyn-Jones.

The Dan Dare Radio Show was sponsored by drinks company Horlicks, who encouraged young listeners to enroll in the Horlicks Spacemans Club, and then marketed a series of related items that could be bought - usually for six pence and a label from a Horlicks jar. The Spaceman Club items included The Spacemans Club Handbook, a Dan Dare Tie, Spacefleet Service Identity Card, The Spacemans Club Badge, the Dan Dare Spaceship Cup (for drinking one's Horlicks, of course), and a Periscope.

RTL, the former Radio Luxembourg have been kind enough to search their archives for one fan, but copies of the show have never been found there and it is believed they were either destroyed after the broadcast, or when their "sell by date" expired.

However, like Doctor Who fans tracking missing TV episodes, there is a remote possibility copies of the show may exist elsewhere. Eagle, and many of its strips, was republished in many countries including Australia, France, Potugal and Croatia (to name but a few) and the radio show was also broadcast in Australia. The original scripts were also sent to Spain where they were translated into Spanish and broadcast by Spanish actors. (The name Dan Dare was quickly changed to Diego Valor).

In Australia, 4AK QLD and 4BK QLD Radio broadcast the show each Monday and Tuesday but so far, no-one has had any luck tracking copies down under. Unlike the Biggles radio show, the Australian National Film and Sound Archives does not appear to hold copies, but now fans are trying to find out of the series was ever broadcast or elsewhere.

It seems unlikely the show was broadcast in South Africa - as yet, no-one seems to have tracked down South African versions of Eagle comic - but New Zealand is a strong possibility.

The BBC’s Radio 4 produced a four part Dan Dare radio serial in 1990 - Dan Dare, Pilot Of The Future, again, based on the first comics story. This time Dan was played by Mick Ford, with Terrance Alexander as Sir Hubert.

• If anyone has further information they think might help tracking down these elusive recordings, please get in touch.
Posted by John Freeman at 2:29 pm