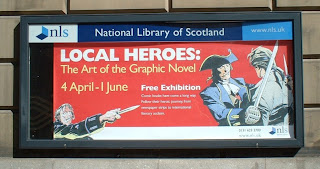 We have been promoting the National Library of Scotland's free Local Heroes graphic novel exhibition in Edinburgh, and its associated events, here on downthetubes for some time now, and having finally seen it, it certainly is an impressive exhibition.

With information panels around the walls detailing the history of British comics, the display cabinets have everything from Obadiah Oldbuck to the current Virgin version of Dan Dare. Graphic novels rub spines with comics history and reference books, newsstand comics and small press. The inevitable copy of Maus is there, but so are Alice In Sunderland, Judge Dredd reprint books, bound copies of Action and Battle, and even Hiberia's small press reprint of new Eagle's Doomlord.
As you venture further into the large exhibition room you will find original D C Thomson artwork. Three pages of Grant Morrison's black and white artwork from Starblazer 15, Algol The Terrible, including its title page are there as well as Ian Kennedy's painted cover to Starblazer 101, Forgotten World. Strangely enough downthetubes used the same images to illustrate our Blazing Through The Secrecy Starblazer article two years ago. There is also a page of Dudley D Watkins artwork from the D C Thomson version of Kidnapped. The eight panels of this have been extended and coloured since their original publication. 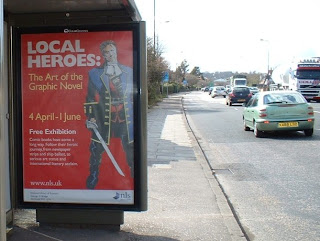 And yet the best is left for last. When Alan Grant and Cam Kennedy created a new version of Kidnapped for the One Book One Edinburgh reading campaign in 2007, the National Library of Scotland bought the original artwork for the successful graphic novel. In addition to Cam Kennedy's painted cover and a selection of preparatory sketches and colour tests, the exhibition has the entire 63 pages of original painted art framed and on display in printing order. Indeed there are so many art boards that they do not fit on a single wall and wrap around onto a second wall. It is a quite breathtaking display of original art by one of Britain's best living comic strip artists.
The exhibition runs until 1 June 2008 and is open seven days a week. It is even being promoted on Edinburgh's bus shelters.
Posted by Jeremy Briggs at 4:09 pm