I approached the How Manga Took Over The World exhibition at Manchester’s Urbis museum, writes Matt Badham, with some trepidation. I’m not a massive manga and anime fan and certainly don’t know my shonen from my shojo. However, perhaps because I’m not a fan, I found that I got a lot out of this exhibition, which, despite being relatively small, is densely packed with information. 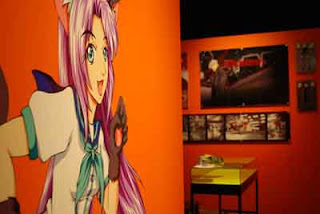 Urbis itself is a massive glass ski-slope of a building that sits just across from Victoria Station. It houses all sorts of exhibitions, from retrospectives on music and street culture to showcases of local graduate work. On the day I attended the museum, the foyer had been given over to a youth information festival with stallholders handing out flyers about subjects as diverse as housing and sexuality. There were also some children doing various arts activities, which, I’m informed, is a regular weekly event. It was nice to see Urbis doing its bit to encourage young people to come into the museum. I hope that as they get older, they’ll visit again.

Anyway, one ride later in Urbis’s rather unique lift*, constructed, I kid you not, by Italian rollercoaster engineers, and I was thrust into the world of manga and anime. Fortunately for me, Urbis had come up with some nifty ways of combating my ignorance of both.

The first was a rather stylish comic strip introduction to manga and anime drawn by Dave Siddall, which not only gave a brief history of Japanese comics and animation, but also presented both in terms of their cultural context and their growing impact on other countries’ media. Thanks, Dave, for holding my hand as I took my first faltering steps as a potential mangaphile… 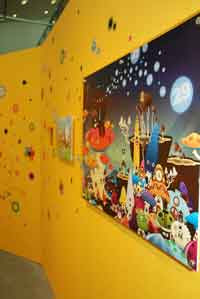 Dave’s comic strip was accompanied by a definition of manga, which, if I were nitpicking, I would say should be the first thing in the exhibition, and some text that gave a potted history of the form. There was also information about Japanese artist Hokusai, who apparently coined the term manga, alongside examples of his work.

The second nifty thing that Urbis had done was to split the exhibition into separate sections that each dealt with different types of manga/anime. Each section was prefaced by a little introduction from Umeko, a manga character specifically created for the show by artist Sonia Leong. Depending on what subject she was introducing, Umeko, or ‘Plum Blossom Child’, was presented as, amongst other things, a vamp, a little girl or an action heroine. The various types of manga and anime covered by the exhibition were adult manga, manga for commercial and educational purposes, action and horror manga, and cute manga. There was also a section in the exhibition about Japanese fashions and trends, a manga lounge where you could read comics and draw, and a mini-cinema playing anime.

And so the first thing that I did was to venture into the adult section (stop sniggering at the back…). To be honest, this was more out of a desire to get this section out of the way. Items inside included a bondage Hello Kitty, a brief guide to love hotels (Google it, actually, maybe not…) and some rather disturbing anime. Suitably sickened, I stumbled back out past the attendants, it’s 18s only, and, journalistic duty done, started to relax and enjoy the rest of the exhibition. 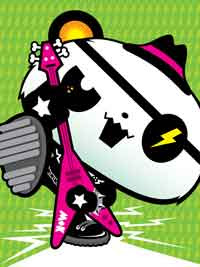 And I really did…

Enjoy it, I mean.

And if the above is gibberish to you, then you’ll probably enjoy the exhibition too. However, if you’re a big manga and anime fan, a word of warning, it may well be that everything in the show is old news to you, a snapshot of a sub-culture that you’re already immersed in.

For this old fart though (in his 30s and losing his hair), it was a real eye-opener and provided me with a tantalising glimpse of a vibrant medium (or media, perhaps – manga and anime do tend to get shoehorned together) that I've previously failed to appreciate fully.

My highlights were pretty much everything except the adult manga. My lowlights… well, it has to be bondage Hello Kitty (shudder).

But there was so much to take in that I feel the show warrants a second visit and, despite her whips and chains, even Kitty won’t stop me from returning.

* If you want to know why the lift’s unique, then I’m afraid you’ll just have to visit Urbis.

Matt Badham is a freelance writer. His work has appeared in the Judge Dredd Megazine, 2000AD and Tripwire. He once lived in Japan for a year and now realises that he really didn’t make the most of it. 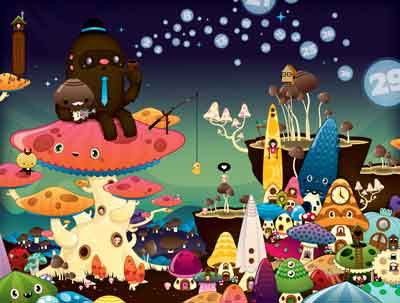 Sadly, I'd have to say that for me the exhibition was almost jaw-droppingly disappointing and I wouldn't consider myself a manga purist by any means. Crucially - amazingly, even - the exhibition actually features almost no 'manga' at all: what it does feature is a pretty predictable array of modern cultural Japanese ephemera and an awful lot of animé to plug the gaps. The real importance of manga, i.e. its ability to deal dramatically with the ordinary, is resolutely missed and instead we are presented with the usual SF/horror/hentai excesses which form actually only a part of the manga movement as a whole.

For the most part, the exhibition feels lazy, ill-researched and, ultimately, rather embarassing in comparison to what it could've been. Although (as a Manchester resident) I'm glad to see the slightly maligned Urbis gradually grope its way toward being something of a museum of graphic design, they will need to do rather better than this, I think.