With now only four weeks to go until the UK’s biggest comics convention at Bristol's British Empire & Commonwealth Exhibition Hall on 10th and 11th May 2008, it’s time to reveal some of the new books, offers and EXpo EXclusives on show.

The Bristol International Comic Expo website (www.comicexpo.net) will be updated shortly with these details and more on the panel rundown for the weekend. In addition, the Virtual Bristol Anthology returns this year – a chance for readers to preview some of the new books available at Bristol, and reserve a copy in advance or order a copy if you sadly can’t make it this time. 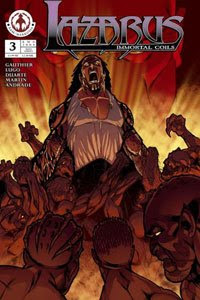 • AAM Markosia (www.markosia.com) celebrate moving into their fourth year of publishing with EXpo Exclusive editions of the Eagle Award-nominated Starship Troopers: Bad Blood #8 and the critically acclaimed The Boy Who Made Silence #3. Specials this year include trade paperbacks offered at £4 each, or three for a tenner – with £10 of back issues given away for free with every £10 spent.
Various AAM/Markosia creators will be around all weekend for signing and sketching, with editors running portfolio reviews for artists and pitch sessions for writers throughout the day on Sunday.

• Ardden Comics are bringing the brand new Flash Gordon #0 and some posters for Shock Squad Seven. Both artists, Neil Edwards (SSS) and Paul Green (FG) will be attending the show and doing signings.
Flash Gordon #0 has an exclusive 12 page story by Brendan and Paul, and won’t be printed again for the direct market.

• Studio Blink Twice, otherwise known as The Etherington Brothers, are the creative team responsible for the award-winning title Malcolm Magic. Their current series, Monkey Nuts, has recently enjoyed a two month run in the Guardian newspaper, and will soon become a regular weekly feature in the children’s comic, The DFC.
They’ll be launching of their new book, Malcolm Magic - the Big Kahuna Collection. Gathering together all twelve issues, the Tusk special, a complete cover gallery and a stunning wealth of bonus material, this perfect bound 304 page trade paperback is truly the one to rule them all! This limited edition gem will be available on May 10th where you’ll be able to get your copies signed by the creators. Additional exclusives to be revealed at the weekend so hurry over and meet the team!

• Graham Pearce brings both issues ten and eleven of Sgt Mike Battle: The Greatest American Hero – issue ten wraps up the epic adventure Last Admin Hero, with eleven a great jumping-on point for new readers: at only £1.50 for 40 B&W pages with a fantastic colour cover, it’s hard to beat.

• On The Banks of The River Croal by Rob Jackson had Comic Book Resources writer Tom Spurgeon gushing: “I wish every cartoonist would do something local like this. There’s something powerful about comics that use the depiction of something right there in front of the artist as the visual component for a work, something arresting just for itself.”
As well as this book, Rob is bringing his brand new comic Bog Wizards a fantasy story which comes with the extra tiny comic How to Read Bog Wizards, and his entire back catalogue.

• Tokyopop UK will be bringing its wall of manga, 10 metres of the latest and greatest titles. Special offers as always throughout the weekend. Rising Stars of Manga artwork from the 2nd years competition will be on display, and TokyoPop writers and creators will be there all weekend, including Hans Steinbach (A Midnight Opera, Poison Candy), Anike Hage (Gothic Sports) and a number of RSOM UK winners. Also: portfolio reviews, and try your hand at playing on their Nintendo Wii and DSs.

• Fanfare (www.fanfareuk.co.uk) and Spain’s Ponent Mon bring the first public UK viewing of the long awaited Disappearance Diary by Hideo Azuma. They’ll also be bringing a wide selection of Marvel and anime T-shirts like you’ve never seen, including the new “Punisher shot on your chest” shirt.

• Diamond UK will be exhibiting in the hall for the first time, and will be giving away copies of Previews and other catalogues along with showcasing new samples of products due throughout the year (hopefully some of the items will be seen for the first time over here in the UK). They’ll also be talking to Indy / Self press publishers to explain how they can look into getting their comics into Previews and will be chatting to consumers and retailers about Diamond throughout the weekend.
Diamond UK are also hosting a Retailer Open Day on Friday 9th May 2008 at the Ramada Plaza and all Diamond account holders are welcome - they just need to register prior to the event. Each retailer that attends will receive exclusive items only available to order and collect at the Expo (these are shared exclusives with the New York comic convention and each have very limited availability).
The following items will be available to buy: Marvel: Iron Man Legacy of Doom # 1 Sketch Variant; Iron Man Mark 1 Battle Damaged Armour Wobbler; Metal Gear Solid: Raiden Stealth Camo Action Figure.

• Clown Press (www.clownpress.com) will exclusively release their new book, The Prison and other tales at the Bristol Expo. This is a collection of observational stories based on creator Adam Grose’s perspective of the 21st Century and the current events happening around us, political observations, some prose and poetry and some short stories based on the concept of love. In all there are 14 stories, ranging from one page to six pages and there will be a sketchbook section with seven illustrations, preview images for an upcoming graphic novel and some paintings/examples of my art. It will be perfect bound, 52 page graphic novel comic book and available for £4.95.
The recently released collected TPB of ‘Cosmogenesis’ will also be available, a 550 page graphic novel collecting all the books.

• Newcomers to the self-publishing arena C2D4 (www.c2d4.com) will be making their Bristol debut at this year’s Expo. Comprised of Tony Wicks, artist writer, and Martin Buxton, writer, they are planning to bring their twisted take on all things to comics with the launch of three titles:

Last of the Chickenheads - In a genetically modified future, a pandemic leaves the fittest of the fit to fight for the abandoned technology. Lions, hyenas, chickens, cockroaches…Oh my!!
Jack in the Box - Men are products of their environment. This theory will be put to the test by otherworldy beings living beneath our feet. But is their cruel experiment about to be inadvertently ruined by a young girl?
Crowman - Welcome to the town of Havenville. A town long in the grip of corruption and fear. Not a nice place to live, an even worse place to die. But that’s all about to change.

• Liz & Terry Martin from Urban Jester will be bringing issues 1, 2, 3, and hopefully issue 4 of Murky Depths, their ‘Quarterly anthology of speculative fiction’. They recently set up a publishing arm called ‘The House of Murky Depths’ and are publishing a Richard Calder comic entitled Death and The Maiden. All titles will be available at reduced prices for the Expo, and there will be a special rate for new subscribers. They will also be looking at portfolios and pitches from potential contributors to their anthology.

• Dare Comics’ (www.darecomics.com) David Golding and Adam Handy will be signing copies of issue #1 and #2 of The Hunter, and will bring the full portfolio of original artwork for both issues of The Hunter. David will be around both days to draw original commissions.

• Image Comics’ book, Studio Space, receives its worldwide launch at the Expo – it's not released around the world until 29th May, but exclusive copies of Studio Space in paperback will be available to buy from the Tripwire magazine table at the show. A Studio Space panel will also be taking place on Saturday afternoon at the show and both writers of the book, Joel Meadows and Gary Marshall, will be appearing at Bristol.
A 320 page oversized paperback and limited hardcover, this unique project looks at the work of 20 of the world’s finest comicbook artists and illustrators, examines their start and gets into their working patterns and practices. With an introduction by Guillermo (Pan’s Labyrinth) Del Toro and a foreword by fantasy grand master Elric creator Michael Moorcock and a list of artists that reads like a who’s who of the comic industry, Studio Space will be an indispensable addition to the library of any aficionado of popular art. The full list of artists featured: Brian Bolland, Dave Gibbons, Tim Bradstreet, Howard Chaykin, Sean Phillips, Duncan Fegredo, Joe Kubert, Mike Mignola, Tim Sale, George Pratt, Tommy Lee Edwards, Adam Hughes, Sergio Toppi, Walter Simonson, Jim Lee, Frank Miller, Bryan Talbot, Alex Ross, Steve Dillon, and Dave Taylor.

• Finally for now, Tim Perkins and Wizards Keep are packing their stand with events and launches including the Worlds End Ashcan, which comes with a money off voucher that will enable the purchaser to redeem it against the cost of the graphic novel upon its release in 2009; Worlds End Signed and numbered limited edition Figurines and unpainted Kits; and a very limited supply of Black & White Giclees from a selection of pages from Dark Crusade issue #1 and the unpublished #2 Signed by both the Writer. The company is also running an exclusive Expo competition - more details on their web site (www.wizards-keep.com)

The Bristol International Comic Expo 2008 will be held over the weekend of 10th and 11th May 2008 at the British Empire & Commonwealth Museum and the Ramada Plaza Hotel in Bristol, England, with an early bird film night on Friday 9th May. Full details are available on the official website, www.comicexpo.net – including ticket ordering details, just £6 for adults for each day, accompanied children free, ages 12-16 just one pound.
Posted by John Freeman at 10:53 pm

Email ThisBlogThis!Share to TwitterShare to FacebookShare to Pinterest
Labels: Events