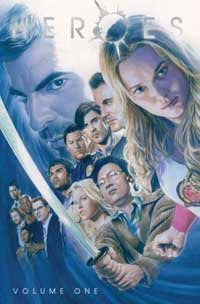 London-based Titan Books, well known for its comics collections and which recently announced a publishing deal with Egmont for new Roy of the Rovers and Battle titles, topped sales in two categories UK sales in the week ending 2nd March.

At number one was the first volume of the phenomenally successful Heroes, the graphic novel tie-in to the acclaimed US television series, which has already reprinted multiple times since its publication in late November 2007, and is set to be released as a paperback for the first time in July.

Number two in the chart was the perennially popular Watchmen, released as an 'Absolute Edtion' in February . Already regarded as a classic among graphic novels, and the only graphic novel voted into Time magazine’s Top 100 Novels of all time, the movie adaptation of this stunning tale is now in production for release in March 2009.

With more Watchmen titles in the pipeline for Titan in the build up to the film’s release, the company says this is a title that won’t be moving from the limelight in the coming months.
Posted by John Freeman at 3:08 pm