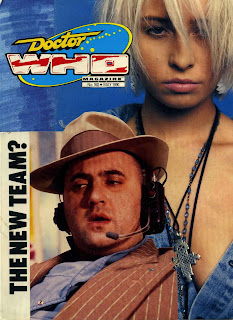 I recently came across this spoof Doctor Who Magazine cover in my archive, which once graced my office wall at Arundel House, Marvel UK when I was editor of the title in the 1990s.

Do you think it will sell on eBay along with my other weird items?

I have to confess that, knowing some TV crew or other was coming to record a "When is Doctor Who coming back" spot (and there were a few of those) after the show went on 'hiatus', I'd put things like this up to send some fans squealing to their friends to reveal the "latest news" about Doctor Who. The TV crews wouldn't notice them, not being Doctor Who-savvy, but fans might just catch a glimpse of them and they would soon, perhaps, be the talk of the Fitzroy Tavern, one of London's infamous Doctor Who fan haunts once a month. (In reality, fans back then were much more savvy than they are now in the days of wild Internet-inspired rumour and were not, I think, ever fooled by these antics. But I kept trying).

The full-size Dalek in the Arundel House window was just one of those, making think the building was part of the BBC. (I seem to recall we eventually had to move it because so many tourists wanted their photograph taken with it).

Of course, all of this chicanery was pre-Internet, but imagine what would happen these days if someone thought this was a real DWM cover suggesting Alexis Sayle was to be the new Doctor Who and Wendy James of Transvision Vamp would be his companion? How many fans would simply Walk on By without a glance? 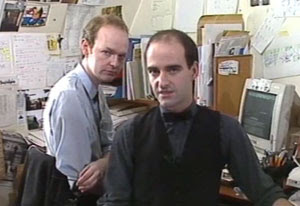 Other wicked wind ups were suggesting John Levene (UNIT's Sergeant Benton) worked for the magazine as a receptionist (as seen in Reeltime Pictures Doctor Who Magazine Myth Makers) and hinting the Magazine held complete copies of The Daleks Master Plan and The Power of the Daleks (Myth Makers again). You can't see the folders that were supposed to contain these tapes in this screengrab unfortunately - they're behind Nick Brigg's head - but they were there.

I still have the (empty) folders.
Posted by John Freeman at 1:33 pm

Email ThisBlogThis!Share to TwitterShare to FacebookShare to Pinterest
Labels: Doctor Who, Humour