Martin's Match of the Day 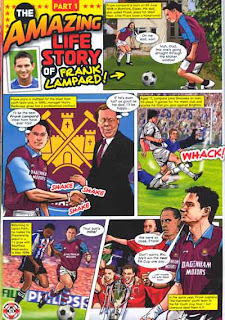 Artist Martin Baines, whose work includes strips for Spaceship Away, DC Thomson and work on Titan's Wallace & Gromit, is busy working on the BBC's new, weekly, Match of the Day magazine, which has just launched.

The title features a comic series drawn by Martin which tells the lives of famous footballers for the magazine, which is aimed at the 8-12 market.

Inspired by the iconic programme, Match of the Day magazine aims to position itself as the must-read title for all young football fans and will be packed with star interviews, match results and tables from the weekend, the hottest football gossip, posters, quizzes and competitions.

The magazine also includes an eight-page pull-out skills guide, encouraging children to get active and to increase their chances of becoming a star of the future.

Supporting the magazine, motdmag.com will feature bespoke football games and up to the minute statistics, which users can personalise to their own team.

"Research has shown there is significant demand for a title aimed at 8-14 year olds focused not only on the star teams and players, but also encouraging young football fans to increase their own knowledge and improve their own game."

"I'm very excited about the launch of Match of the Day magazine," says Editor Ian Foster, "and am confident that the mix of star interviews, results, gossip and skills advice will prove hugely popular with football-mad youngsters."

• Match of the Day magazine is on sale every Tuesday