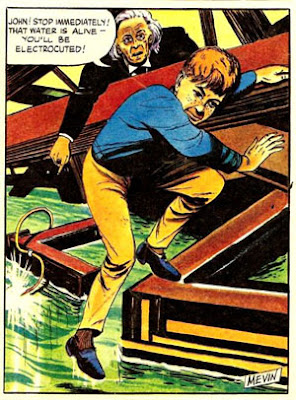 Perishers and TV Comic Doctor Who artist Bill Mevin is one of several comics creators interviewed on a special release of the Doctor Who story The Time Meddler, released 4 February in the UK.

This is the first of several "Stripped for Action" features which will feature on upcoming Doctor Who DVD releases. This documentary centres on the First Doctor's comic strip adventures which began in TV Comic and in addition to Mevin includes interviews with comics historians Jeremy Bentham and John Ainsworth and former Doctor Who Magazine editors Gary Russell and Alan Barnes. (Russell edited Marvel UK's Doctor Who Classic Comics, after John Freeman negotiated purchase of publishing rights for all the Doctor Who TV Comic strips on behalf of Marvel UK, with what was then owner London and North Surrey Newspapers, now owned by Trinity Mirror).

Bill Mevin, now 87, studied at Liverpool School of Art Before joining Gaumont British Studios as a trainee film animator, working on the 1954 animated film Animal Farm and various shorts. He then went on to work as a topical cartoonist for the Sunday Chronicle newspaper for six months, later working in children's comics for several years on characters that included a six-month stint on Doctor Who for TV Comic - a strip he remains proud of to this day - Popeye, Bugs Bunny, Yogi Bear, Space Patrol and many others.

He later created The Soapremes for the Daily Mail, a cartoon strip satirising American soaps Dallas and Dynasty, before going on to work on The Perishers for the Daily Mirror for over eleven years before its cancellation. You can view caricatures and other art by Mevin on The Authentic Perishers web site and read a more detailed profile of Bill's career on Bear Alley). 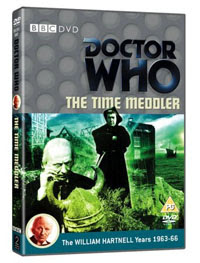 Every comics incarnation of the Doctor will feature in the "Stripped for Action" series which is being co-ordinated by acclaimed writer and publisher Marcus Hearn. Interviews for a Seventh Doctor segment, recorded this week in London include Paul Cornell, Lee Sullivan, Simon Furman, John Freeman and Andrew Cartmel.

• Buy The Time Meddler from amazon.co.uk
Posted by John Freeman at 9:03 am